As a former dog handler, I don’t do cats; but I found myself caring for a 3 week old rescue kitten. Fast forward 3 years, I had a 26 pound terror running my life. Charlee had stop pooping in the litter box about a year earlier, and had recently decided that even with fresh litter in a large box, she would not be peeing in it either. My friends and family refused to come over because they were scared of her. Charlee would hiss, and swipe at anyone who came in. I actually used to believe that it was a god send that she only bit me! At one point I had a police officer tell me that if anyone broke in, he was sure the cat would get them.

I wish I had called Ingrid when I first found Charlee! What a difference it would have made! In the first ten minutes of being at my house with Charlee, Ingrid informed me what the underlying problems were. I had been trying for THREE years to get help; she did more for us that day than any of the books, online sites, or my vet had done for us in 3 years.

In less than a month, Charlee was back to using her litter box full time. She has stopped biting me, and is now down to 19 lbs.

Ingrid’s price was extremely reasonable, and she came to my house for less than the vet school was going to charge me to bring my cat to UGA. Every time I have had a question, she has immediately responded and helped me.

I find myself a cat person now, and recommend to everyone who has a cat, is getting a cat or thinking of getting a cat to work with Ingrid!
Sera Wolcott
Lawrenceville, Georgia

Charlee spending time with her mom and NOT biting her! 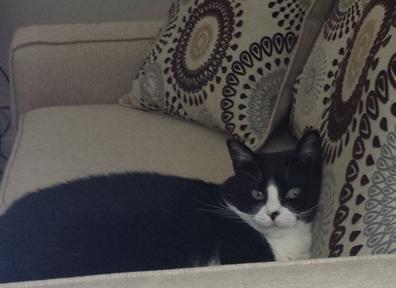 Charlee sitting on sofa with guests in the home.