We had problems with our cat, Freya, almost right from the beginning. She was poorly socialized, hyperactive, and needed a crazy amount of interactive playtime. Soon she was swatting and biting me anytime she wanted to play and I was otherwise occupied. If I wanted to take a phone call without being attacked, I had to go in the bedroom and close the door. We worked on this in every way possible and made a lot of progress over a period of about 9 months, especially on the aggression. But ultimately, it was just way too hard to manage. She got very worked up and hyper one night an pounced on me in my sleep, leaving an ugly bruise on my arm. We read everything we could find, consulted our vet, online forums, and friends who had cats. The consensus was clear: We had to get her a playmate. We went to a shelter and found a male cat, close to her age, who seemed to have a similar energy level style of play. We read about how to introduce two cats and got some guidance from the shelter.

Immediately when Carson entered our home, he was not the affectionate, fun loving kitty we’d met in the shelter. He was out of his element. He hid under the bed for days and hissed anytime one of us entered the room. He would not let us near him. We consulted with the shelter volunteers, and they said he was shy. It would take time. But they also told us he had been very loving with the other cats in the shelter and that when a new kitty came in. Carson would take the frightened cat under his wing and care for it. We hoped he would be so patient with our Freya. He warmed up to us VERY slowly. Freya, of course, was very interested in who or what was behind the door. We tried visual contact with Freya, including treats, followed by carefully supervised visits. Things seemed to be going reasonably well, until one night when we thought they were safely separated, we heard terrible cat screams coming from Carson’s room. Freya had gotten in. They did not seem to be fighting, but Carson was very scared. He spent the next 24 hours with his head underneath a pillow. Meanwhile, Freya was more difficult and demanding than ever. She stopped using the litter box and eliminated all over the basement. Any spare time we had was taken up with managing cats. We started to talk about returning Carson to the shelter. We consulted with our vet repeatedly, and she doubted Freya's problem was biological (though she had not examined her since the litter box problem started). She thought Freya’s elimination problem was due to Carson's presence and doubted the two would ever be friends.  She suggested several things we had already tried. She thought we might need to return Carson and also consider rehoming Freya, whose behavior problems she was familiar with. We were heartbroken and exhausted.

That’s when we got in touch with Ingrid. She advised us right away that the vet really needed to examine Freya and run some specific tests.  She told us how to set up a “litter box cafeteria” to help Freya. Ingrid’s advice helped us solve the elimination problem immediately. Sure enough, Freya had a worm and had probably developed an aversion to her cat litter due to uncomfortable elimination. A deworming and some new litter options solved the problem right away. Ingrid also gave us a specific protocol for a very slow and gradual reintroduction of the two cats, including some suggestions for very high appeal treats that would motivate them to participate. She advised us on some enrichment and vertical space solutions that might help Freya while the two were separated and diffuse potential conflicts as we introduced Carson.

It took months, and there were many times we were not sure it was ever going to work. Introducing cats was our full time job, it seemed. Freya had no manners. She did not seem to know that a hiss means back off and seemed to want to go right up to Carson and smack him or jump out and scare the crap out of him (her idea of fun). Ingrid continued to encourage and advise. We sent her videos and asked a lot of questions. She recommended supplements that could help Freya calm down. Finally, just over four months after we first adopted Carson, our two cats seem to be friends! They can still get a bit nervous around one another and squabble sometimes, but they also run around the house together and nose-touch whenever they cross paths after being separated. Freya now understands when to back off, both with Carson and with us. I no longer get attacked when I'm on the phone. By watching Carson, she has actually learned to play with toys by herself from time to time when we are busy. We knew they were friends when I found them napping on the bed together. We are very happy with the outcome, and so are our kitties! 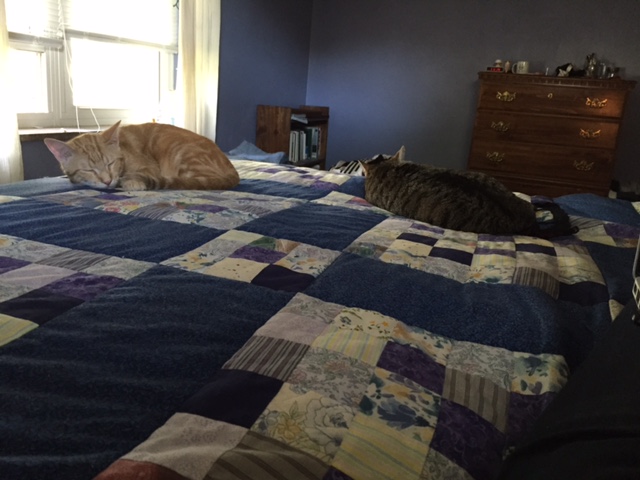 First sighting of them hanging out together! 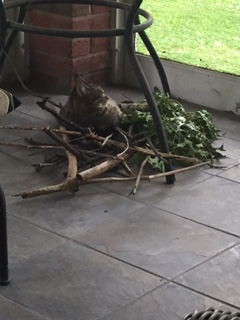 Enrichment nest! Some sights and smells from the outdoors!