Enjoying his new indoor only lifestyle with sister Penny. 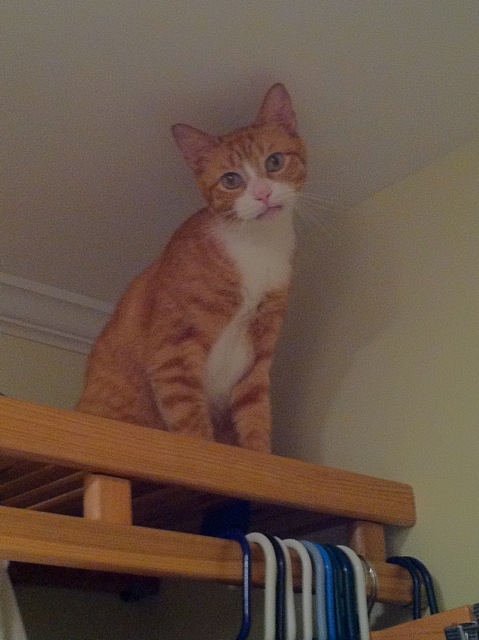 Harvey creating his own vertical space in the closet. 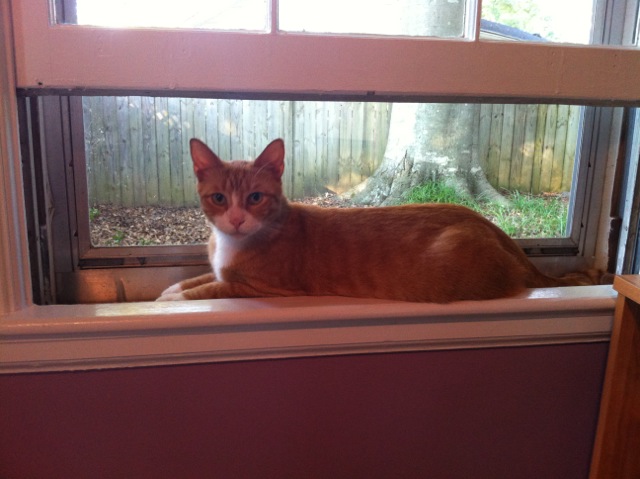 I adopted Harvey along with another, younger cat about a year ago. A few weeks into our new family life, I thought it would be fun to take him outside on a harness. He had the time of his life and thus began the downward spiral of crying and howling until I would take him out again. But it got to the point that any time I was home and we were not outside, he was crying. I eventually gave in and let him go outside on his own, but to ease my concern about all the outdoor hazards that can be fatal to cats, I decided he would be okay so long as he slept inside. Harvey had different ideas. After dinner when it was dark, he would cry and cry and cry until I couldn’t stand it anymore and let him out. At this point I have created a monster. I volunteer with an animal rescue and am acutely aware of the dangers that can be painful, unpleasant, horrible death to a cat. I cannot justify letting Harvey be an indoor/outdoor cat while I am rescuing animals; it is too big a discrepancy. So what am I going to do?? If this cat does not shut up, I will wind up killing him with my own hands!

So I call Fundamentally Feline. Ingrid comes and lets me show her around my house and introduce her to my two cats. While she is there Harvey does his meowing and crying, insisting I let him go outside, so Ingrid got to hear and see firsthand what I have been dealing with.

We discuss some courses of action and I commit to doing everything I can so Harvey can be happy but I can also keep my sanity. Long story short, Ingrid discusses some fundamental changes I can make to enhance Harvey’s indoor world. Most importantly, though, is to not give in to his whining. We come up with a plan if he starts crying in the middle of the night, because obviously I have to sleep. So if worst came to worst, I had a backup plan if I was on the verge of throwing my hands up in the air and just letting him go outside.

After about a week of spending more play time with Harvey, introducing foraging toys, and completely ignoring him when he would whine, the crying decreased dramatically. It continued to decrease over time, and even friends would comment on how much quieter he was being.

Now he is a happy boy who can safely observe the outside world from his porch, and a sane Mama who loves him completely =)