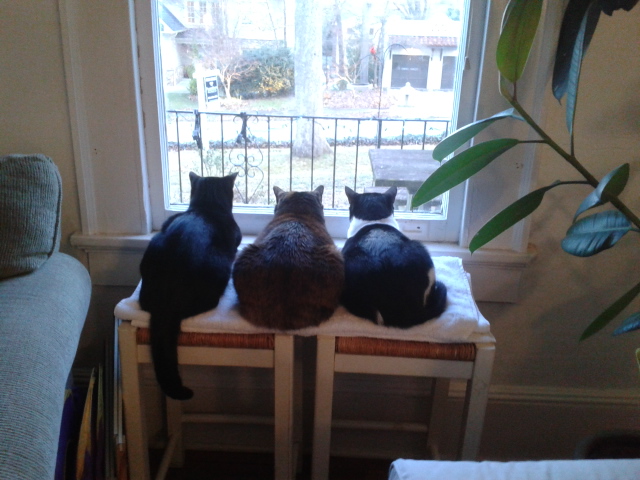 Here is what their mom had to say!

I'll get to how Ingrid solved my cat problems in a minute...first, I want to say that you don't have to have a problem to benefit from Ingrid's great knowledge and experience.  I would encourage any cat owner to invite Ingrid into your home to tell you about how you can enhance your cat's life.  I've always thought I was the perfect cat mom...giving them what I thought was great food, great litter boxes, I'd play a little and they loved me so much.  I couldn't believe how much more I could be doing for them.   Cats are complicated creatures that deserve our understanding and Ingrid helped me do that.  A session with Ingrid would be a wonderful birthday or holiday gift for anyone with a cat or who is about to get a cat!

Now, on to my behavior problem.  I had sisters Julie & Julia who were 7 years old and very close.  They were inseparable.  Julia passed away from heart disease and left both Julie and me devastated.  I work a lot with long hours and it broke my heart when I would leave Julie all alone.  I decided to get her a kitten.  It was a horrible decision.  Buddy was an adorable 8 week old who, within several weeks of arriving, began to bully Julie badly.  She couldn't make a move -- either to get food, water or go to the litter box – without Buddy attacking her.  Slowly she began to withdraw and hide.  I was heartbroken that I had “done this to her”, and while both she and I were still grieving the loss of Julia.  The situation was causing me so much stress, that I dreaded going home.

I exhausted every online advice I could find and nothing worked.  I tried keeping them separated and that was exhausting and I decided no way for any of us to live.  I spent a huge amount of money on toys to try to wear out Buddy (that was impossible) and on sprays and plug-ins that were to calm multi-cat situations.

I am ashamed to say that I thought of returning Buddy to the Humane Society but every time I pictured myself leaving him back at the shelter, I knew that I could never do that.   I didn't really love him because of what he was doing to Julie, but I had adopted him and accepted the responsibility of having to provide the best home I could for him.

During a check-up at the veterinarian with both Julie & Buddy, my vet witnessed the bullying and she suggested additional “enrichment” activities for Buddy.  They are both indoor cats but she suggested leash training Buddy to allow him the stimulation of being outdoors, but safely.  I also purchased a large outdoor cat “cage”.  He enjoyed both acclivities but as soon as he was back inside, he would attack Julie.  After I reported this to the vet, she suggested a cat behaviorist.  I have to say that I thought that there was absolutely nothing a cat behaviorist or expert could add to what I had already tried.  I couldn't believe there was anything else I could possibly do.  But, I was desperate.

I filled out the questionnaire on Ingrid's website and submitted it.  I heard from Ingrid almost immediately and she had had a cancellation so was able to come to my house within a few days.  After several minutes (and after reading the extensive questionnaire that gives her a lot of knowledge prior to the visit) she turned to me and asked, “do you know what you need to do?”  I sadly said, “find Buddy a new home?”  She said, “no.”  I had to get another kitten, a boy and as close to Buddy's age as possible, and that I had to do it quickly while Buddy was still young enough to bond with it”.  My heart would have sunk at the thought – what if I then had 2 kittens that would pick on Julie? -- except that I already had complete confidence in Ingrid, by that time.  She spent several more hours with me going over so much that didn't involve the issue between Buddy and Julie like the size of my litter boxes, vertical spaces, their diet, their treats, how to play with them, what to do with their toys when I'm not playing with them...she even taught me how to clip their nails.

The following week I found a male kitten that was just 3 days younger than Buddy and I went to adopt him.  On the way home I couldn't have been more nervous.  When I got home, I did just what experts advise, I put Bennie (the new kitten) in the guest room and let Buddy and Bennie meet under the door.  I was prepared to do the whole slow introduction that could take weeks before they would fully meet.  But, I heard Buddy start to purr immediately.   I was so excited to get a solution to Buddy and Julie's problem that I opened the door.  They stared at each other and then sniffed each other and then they began to play and chase each other.  I couldn't believe how happy I was for Buddy!  He hadn't been a bad kitten.  He needed someone his own age to play with!  Bennie and Buddy were slowly introduced to Julie who they could care less about!  They have each other.  Julie has regained her confidence and she and I sit on the couch and watch “the boys” run and play.  I love my 3 cats so much and it's a happy home that I can't wait to return to after a long day at work.