Words cannot express just how grateful we are.  Although these pictures may not look like much; anyone who has lived with cat tensions in the home know these pictures are quite joy inducing.  For the past 4 years, Doodles (our handsome grey tabby) experienced chronic UTIs, along with vomiting and peeing outside the litterbox.  Our previous vet kept him on a continual supply of antibiotics with little guidance regarding nutrition and other preventative measures. Combine his physical pain with the 2016 addition of a spirited rescue kitten (putting it mildly) named Dixie von Pickles and the unintended consequence of increased household stress.  Over the next few months, the stress level for Doodles came to a boiling point after his longtime cat buddy and big sister, Snuffles, became a rival in the house.  It was heartbreaking to see Snuffles and Doodles at odds since they had been close buddies for the past 7 years.  It even got to the point where Doodles would poop at the sight of Snuffles, who can give serious stink-eye.  We were feeling lost with no end in sight.  After our previous vet informed us that Doodles' bladder had become distended due to the chronic UTIs, a course of laser treatments, acupuncture, bladder expressions, and herbal remedies were ordered.  These treatments only made matters worse for Doodles, both medically and behaviorally.  After a desperate online search, we came across a very accomplished cat behaviorist.  Enter Ingrid Johnson and the beginning of some much needed healing in our home.  Not only did Ingrid provide steady and creative guidance with our cats' behaviors, but she also introduced us all to Dr. Globerman at Paws Whiskers and Claws, The Feline Hospital.  It only took one consultation with Dr. G for us to realize that Doodles had not been receiving informed and feline focused medical care.  Not only did Dr. G educate us all on proper cat food and nutrition, but she also pinpointed that part of Doodles health issues were due to being hyperthyroid and that he actually suffered from urinary crystals and cystitis (a chronic inflammation of the bladder brought on by stress).  Our situation was a complicated one yet both Dr. G and Ingrid remained steadfast and clear, along with being a lot of fun to work with.  We learned so much from them!  As we fast forward to today, Doodles has been free of bladder flare ups for 9 months, no longer vomits on a daily basis, and (drum roll) no longer pees outside of the litterbox.  He has become a sweet and sometimes grumpy older brother to Dixie, and is now regaining his confidence around his big sister, Snuffles (who has backed off on her stink-eye).  We are all breathing a lot easier these days and enjoying each other’s company all in the same room (yes, all in the same room).  Yay!
Thank you Ingrid at Fundamentally Feline and Dr. Globerman at Paws, Whiskers, and Claws!  We would not be as we are now without you!

All three together again! 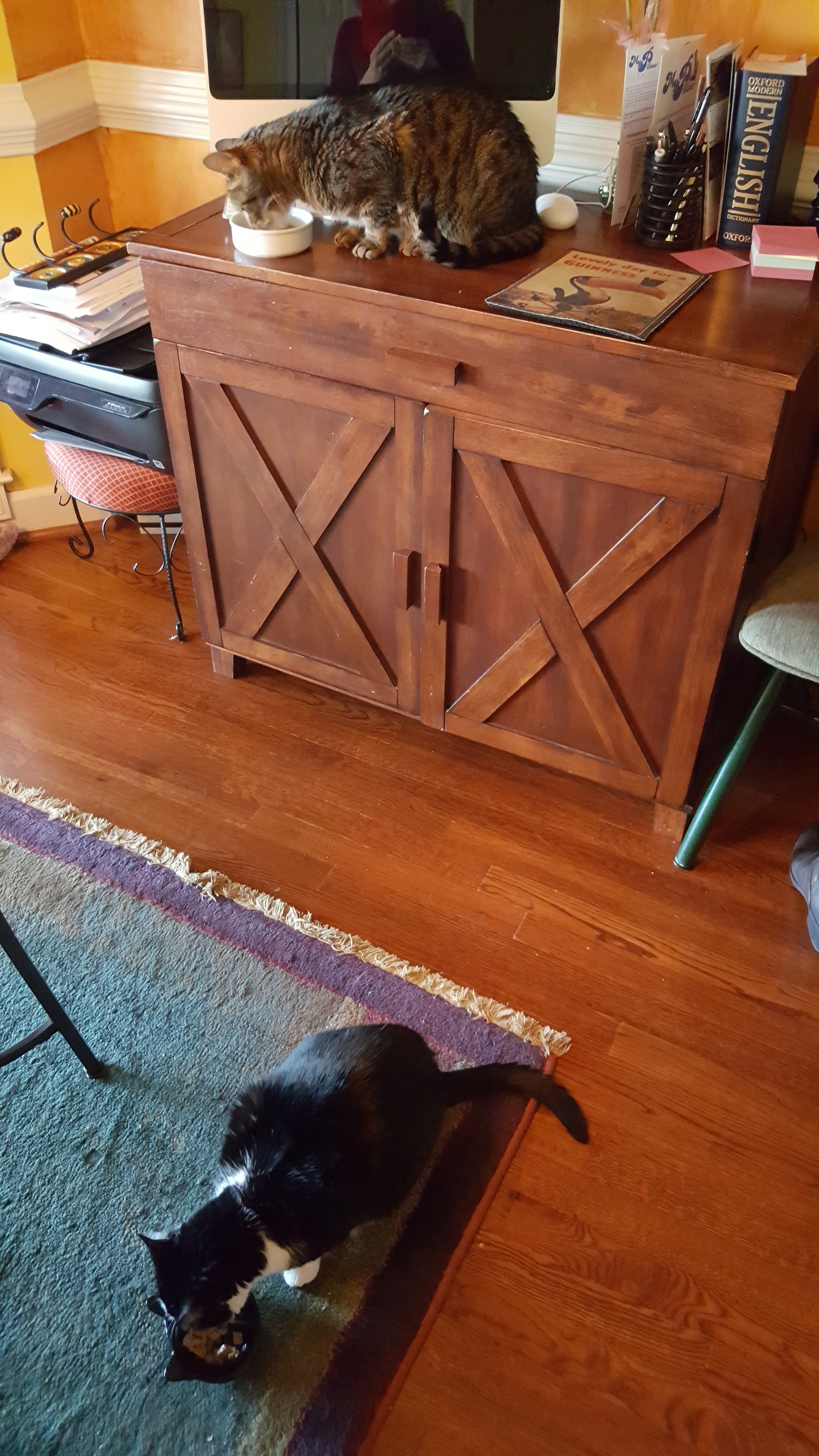 Doodles and Snuffles dining close together.

All three cats together in one room playing.