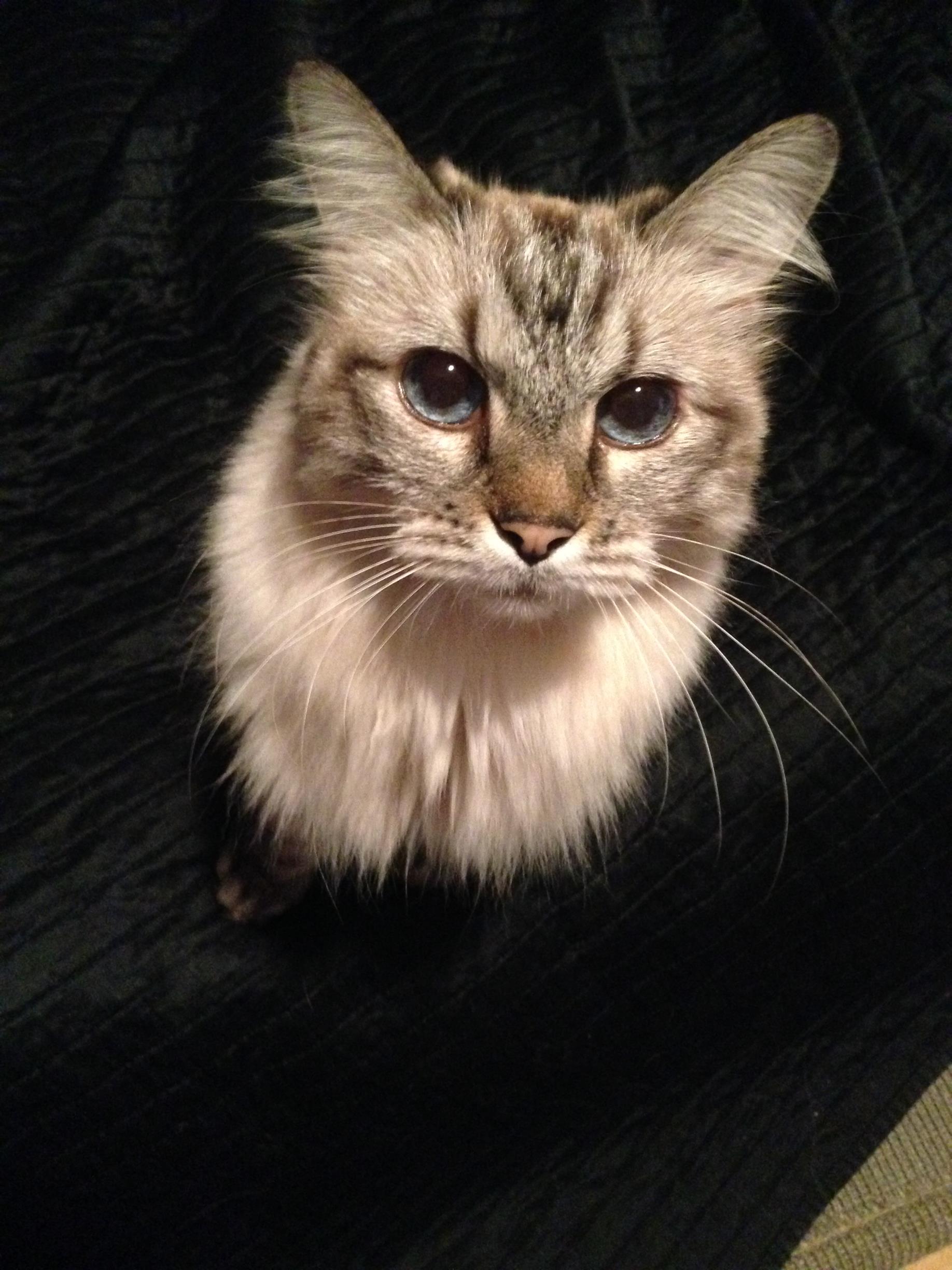 Freyja was honestly one of the kittens that drew the urge to keep the whole litter, I just thought she was so scrumptious. She grew up to be, what I think, was our most beautiful cat we have ever had. She lived up the goddess’s name we bestowed her. Our best friends nicknamed her Sasquatch! They would pet sit for us and leave us notes (remember, she was around before smartphones) or send texts that they had a “Sasquatch sighting!” I always thought this was hilarious but also tells you how elusive she was. She had no shortage of nicknames that is for sure. One that stuck the most, was “Bloomies” or “Bloomers”. You see, I have a thing for calling everyone some variation of “pants”, Leftypants, tortiepants, you name it. Freyja was too classy for pants, she wore bloomers! She also shopped at Bloomingdales (she told me), “Bloomingdale Blooms” was not a rare thing to hear me shouting around the house! I do realize that I am mildly insane, but hey, it’s fun to have nicknames!

Our dear Freyja. Her name means the goddess of love and beauty in Norse mythology. If you have not gathered by now, I’m of Swedish and Norwegian heritage so we have a bit of Scandinavian flare with some of the names we have chosen over the years. Freyja is the last kitten to feature in the “Mammas and her babies” category. I am sharing everyone in the order that we adopted them!

Freyja was a shy kitten and remained a shy cat for most of her life. This is a good life lesson for all of us. You cannot necessarily make a cat be who you want them to be. I adopted these kittens at barely 4 weeks old and they were all so different, every single one of them! Loads of commonality too, so much so that I do think there was only one father, plus the color patterns makes sense, and lead to just the one dad. Still, so much personality variation and I raised them all the same, offering the same experiences. I think it is important to learn to love your cats for who they are and the unique qualities each one offers. 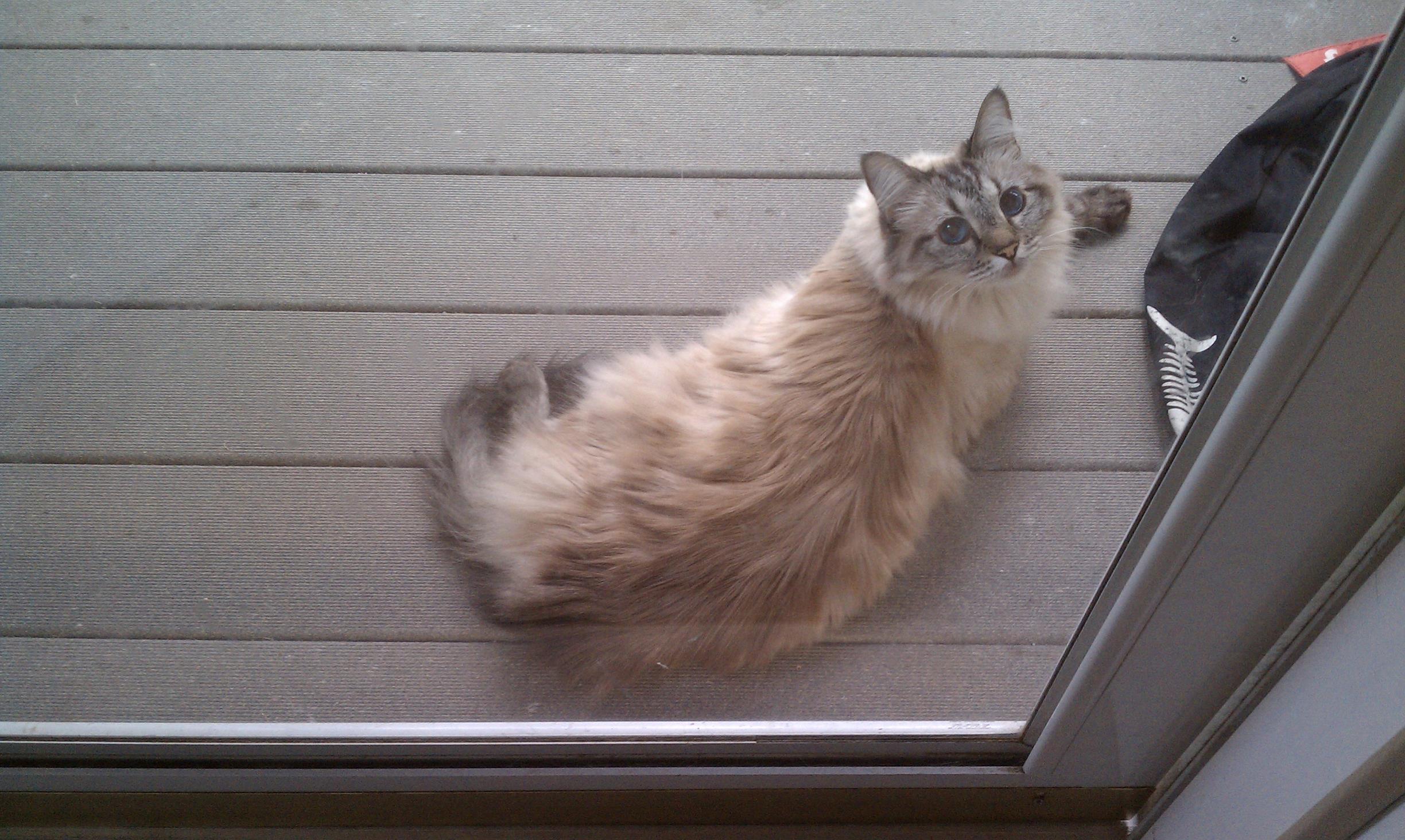 You had to sneak up on her for good pics! 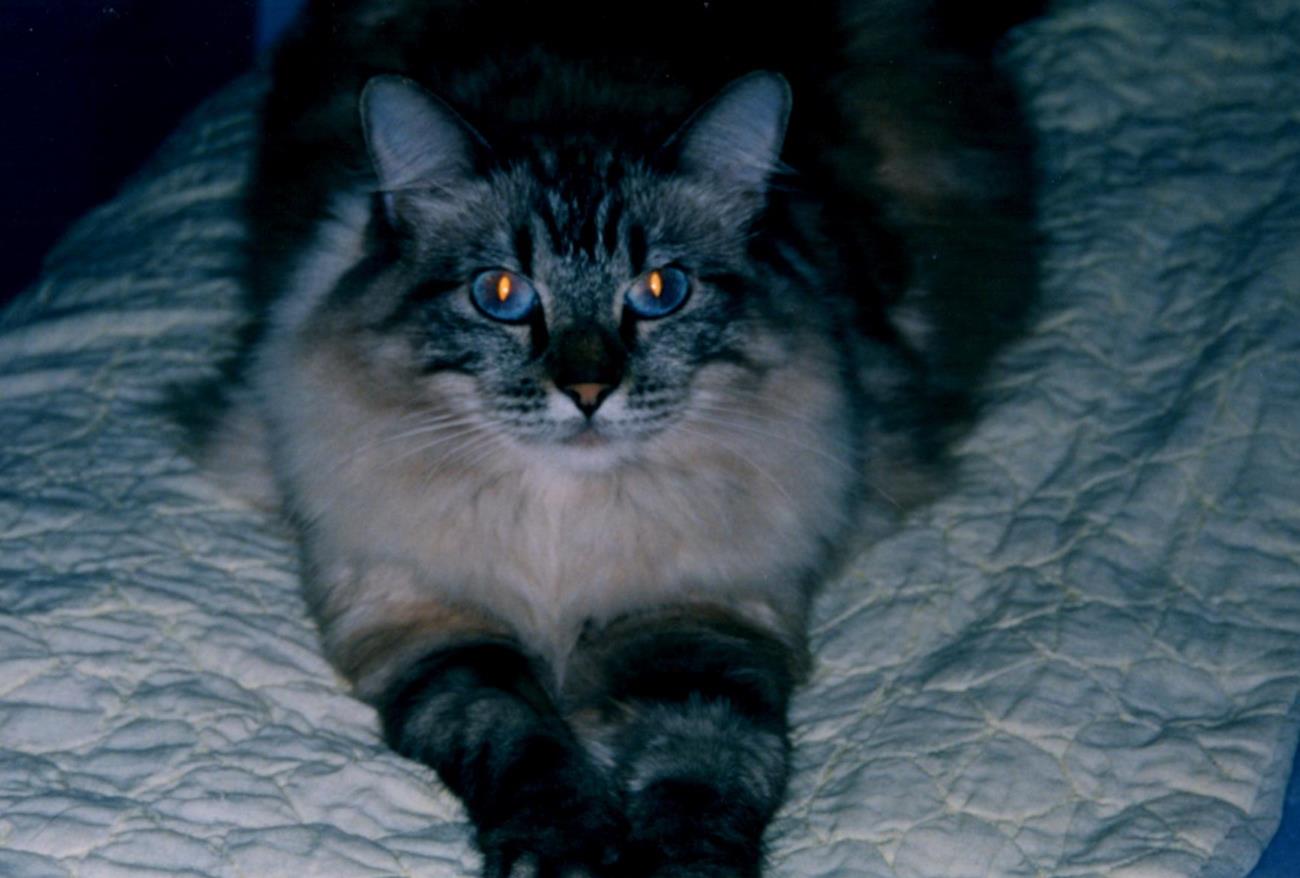 She was a screamer like her siblings, the whole family was so vocal. I can recall all of the typical young cat naughtiness she embraced like getting in the fireplace, shy, skittish, super fun to bathe! If you even made eye contact with her downstairs she would bolt, you definitely could not bend over and pet her or pick her up! No way! However, she did always seem to know that when you were on the toilet, fresh out of the shower or horizontal in bed and that meant you were safe. She would get on our chests and embrace shoulder scratches and drool little drool drops right into our mouths if we weren’t careful! Such a wonderful purr and cooing, it was a special gift. I was the only one who could medicate her and trim her nails her whole life! 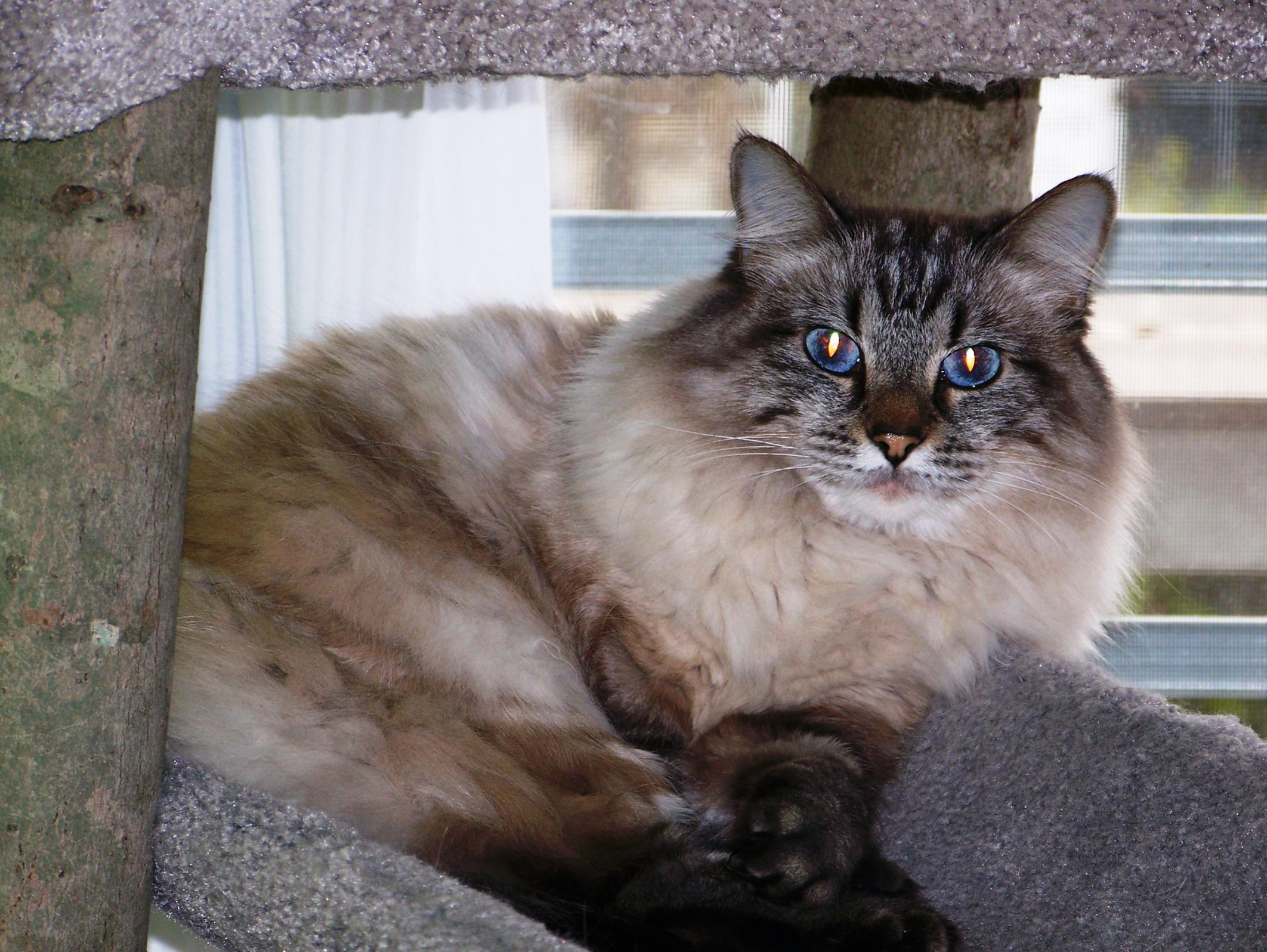 Chillin' in her condo. Look but do not touch! 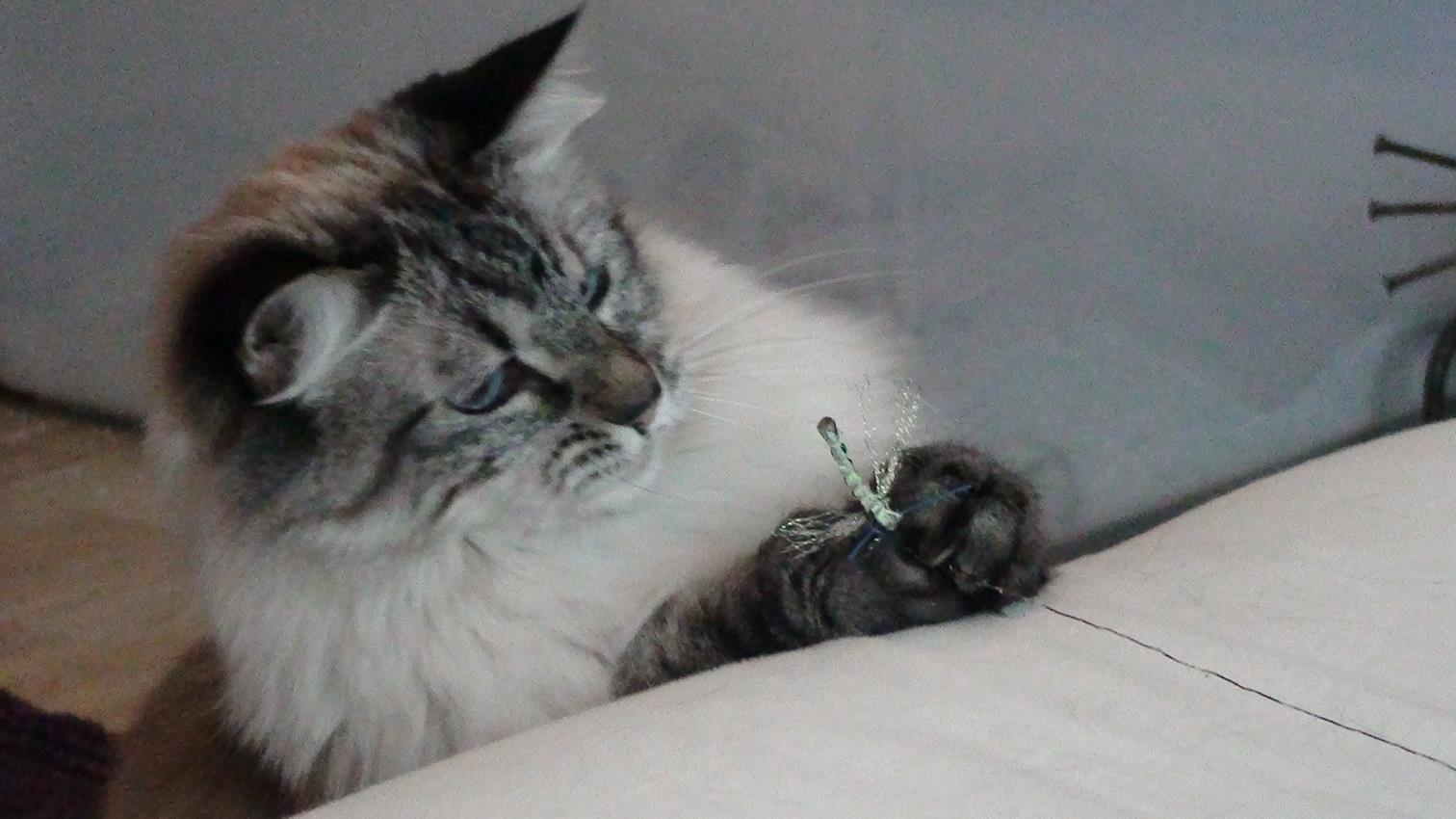 Captured a pic of her playing! A rare photo indeed. 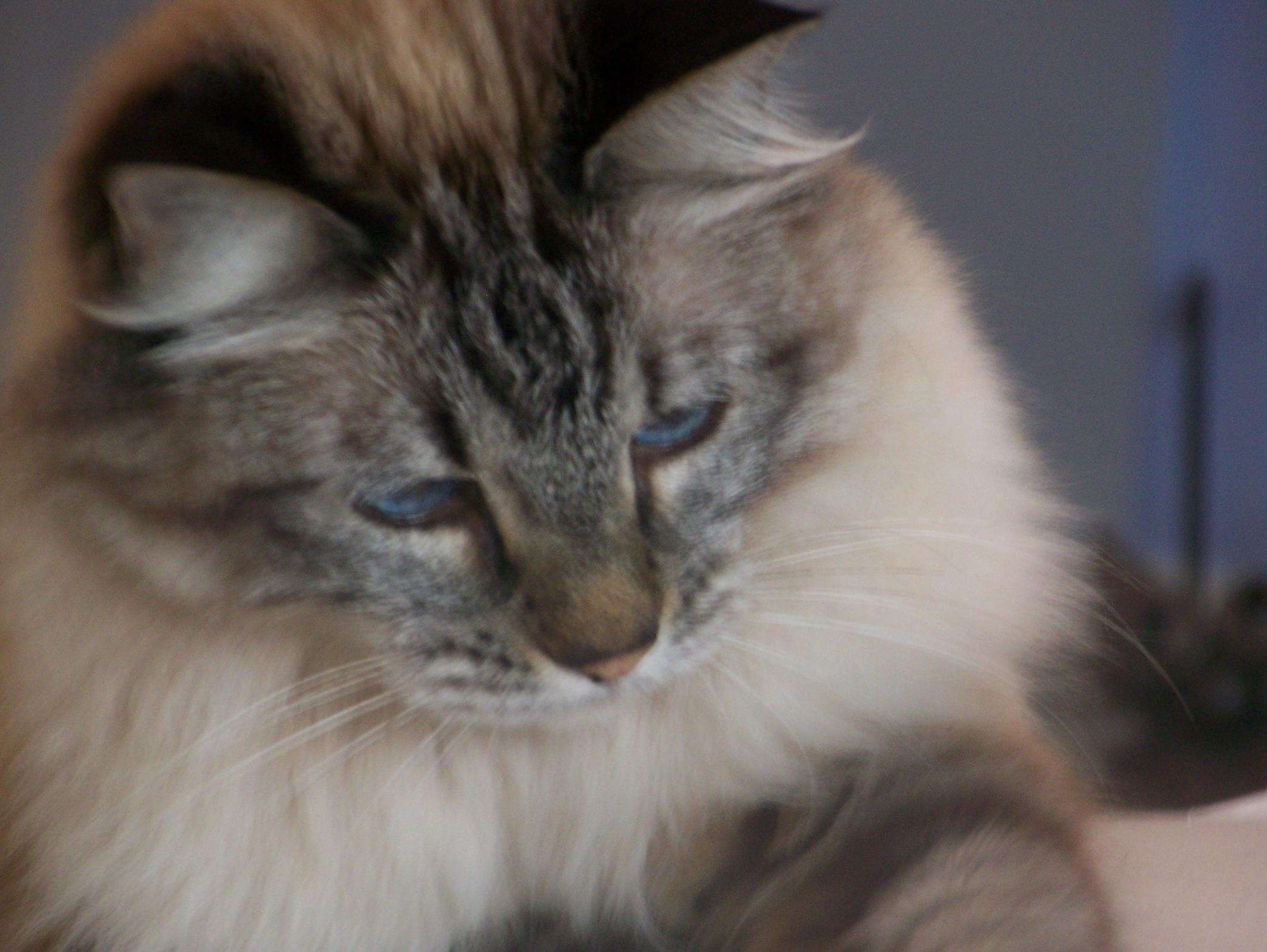 Some pics are not the best because so elusive!

It was as a senior that we really got to know and appreciate her. She gradually started to lose her hearing and it was actually a good thing! We had a new cat! She was far less noise phobic, she started to come downstairs to “meds time” wondering what all the fuss was about, she started to allow us to handle her and once in a while she would grace us with her presence of the sofa. If Freyja came to see you , you did not dare to breathe or move a muscle, it was a special gift and you embraced it! I even trained her to a leash and harness at 18 years of age and she enjoyed our “supervised yard fun” time. It was amazing! 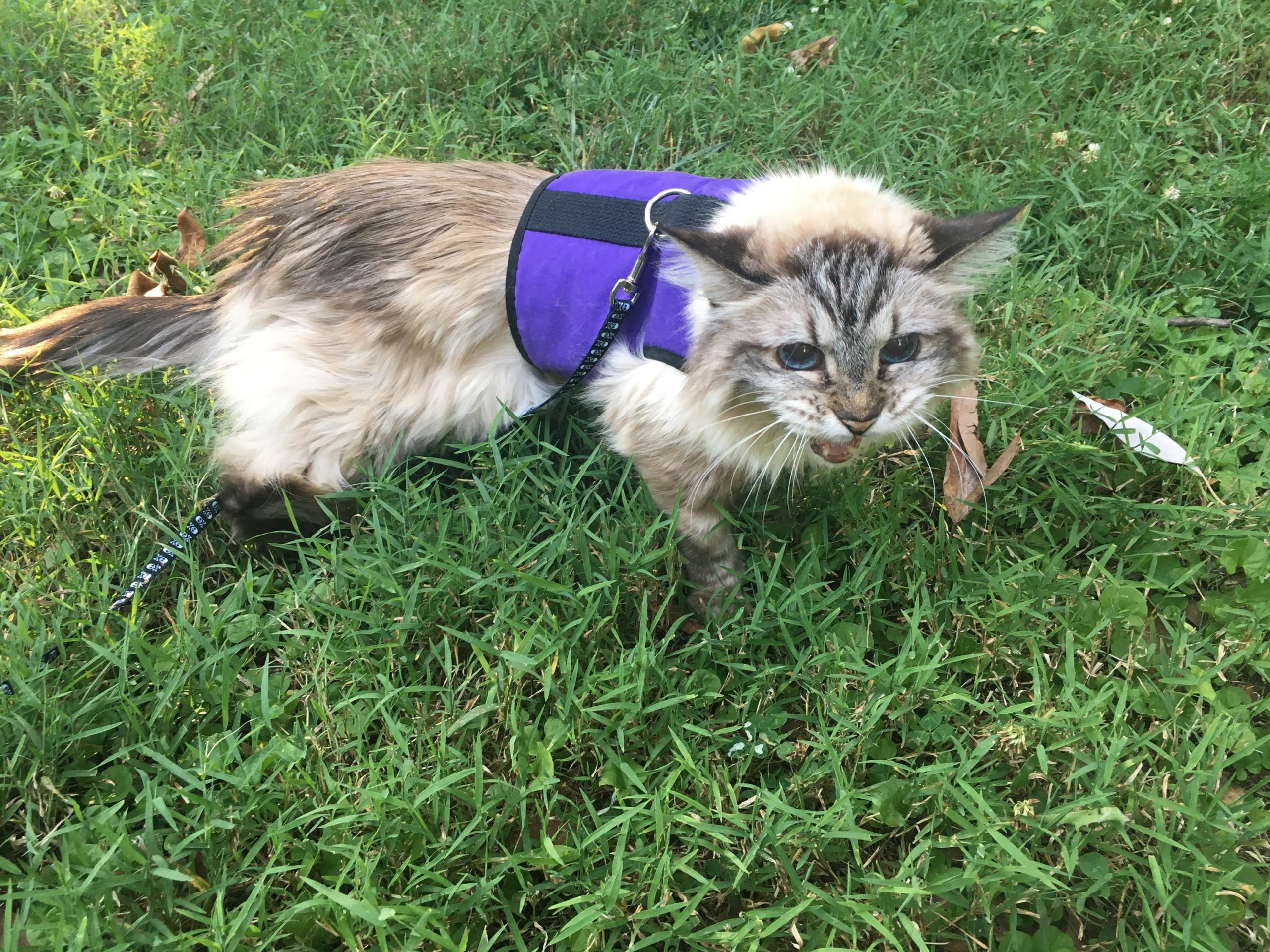 So many words! "You're doing it wrong!" Is what I'm sure she is saying! 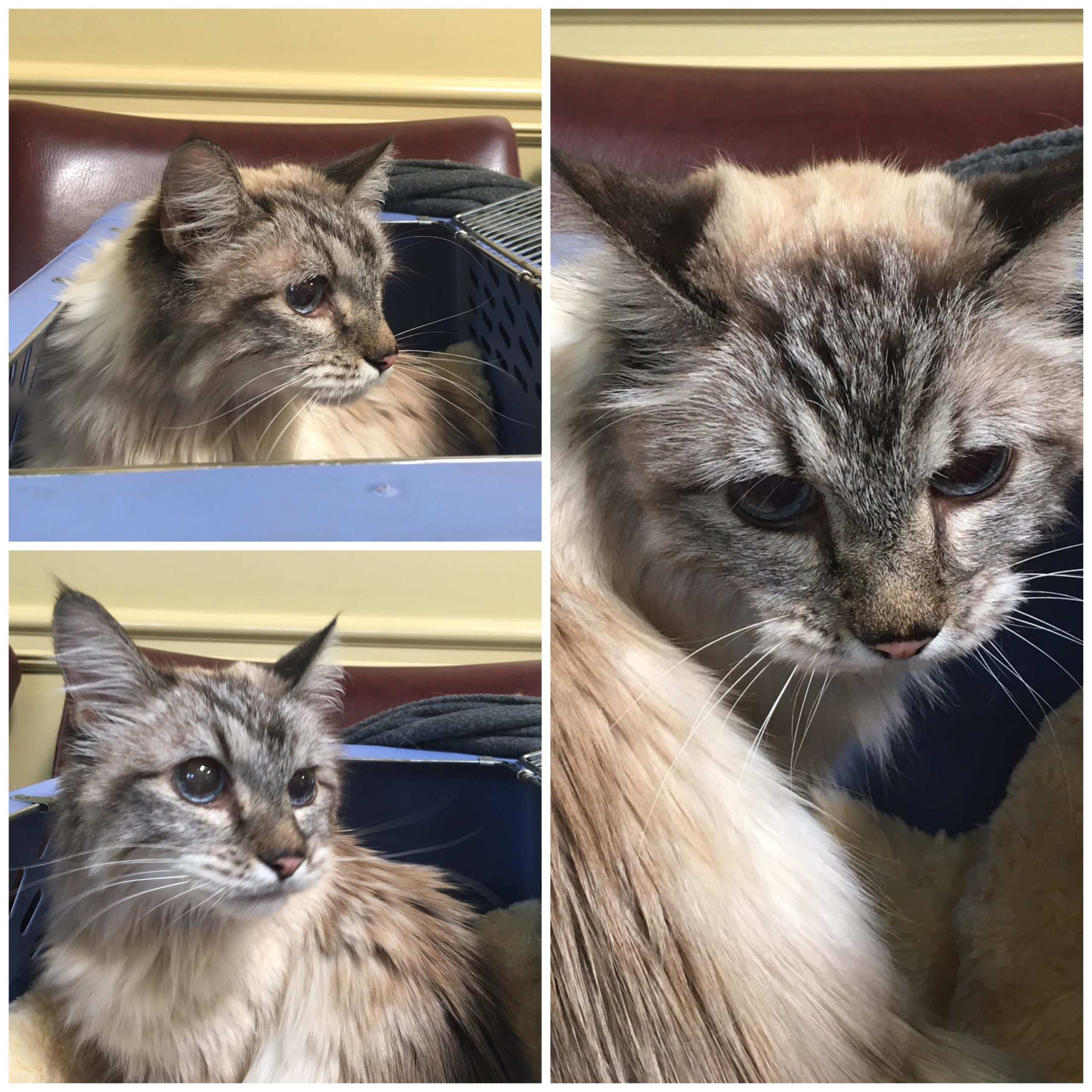 Waiting for our bi-cavity ultrasound at the internist's office! 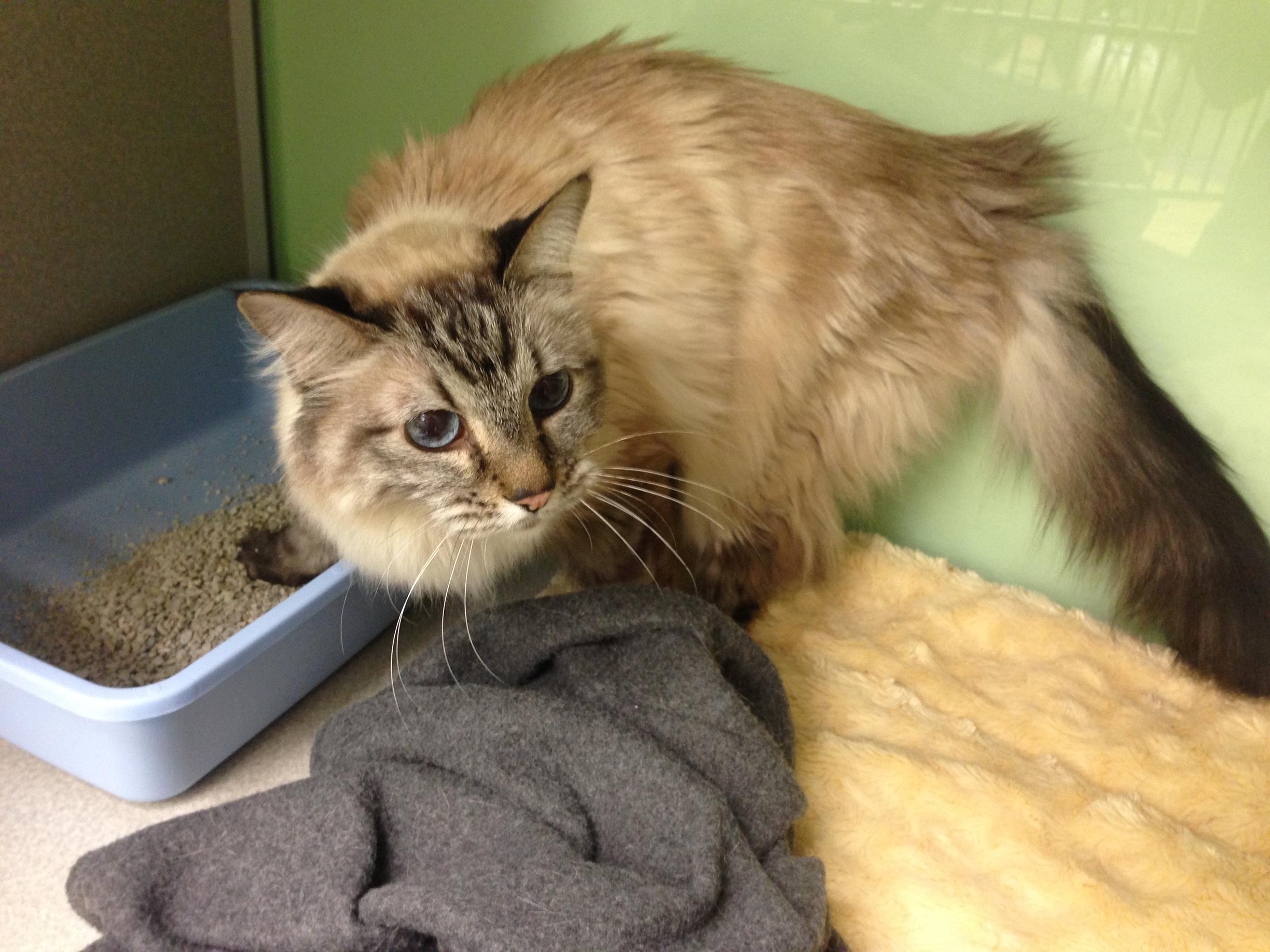 At the vet for lab work recheck. 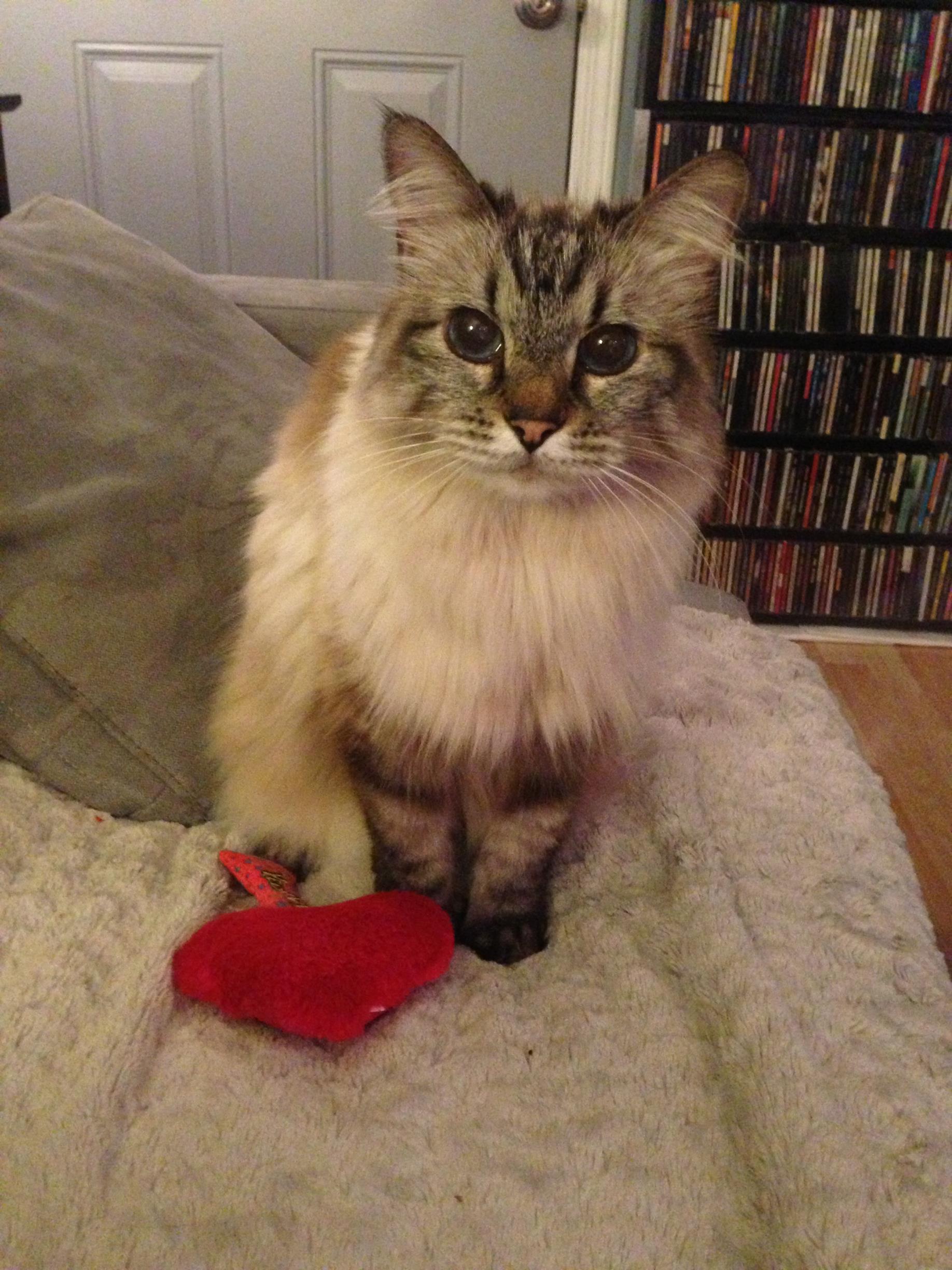 She lived almost exclusively upstairs at the top of the “treehouse” (the vertical space treehouse we built in our master bedroom) until she lost her hearing. Then she decided she needed a change of scenery and decided to join the family. It was awesome. She pretty much set up shop on a cat condo right in-between the kitchen and living room, she was in the heart of the action for her last 4-5 years of life. She would bark orders at us from the top of the condo, it was glorious! She demanded a lot of room service and we obliged, we were a very dedicated staff. This also led to us missing her more than we ever thought because she blossomed into such a big personality! 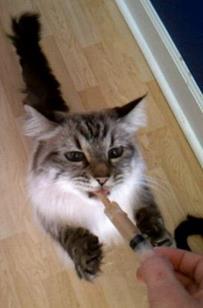 Enjoying meds time with a syringe of yummy food. 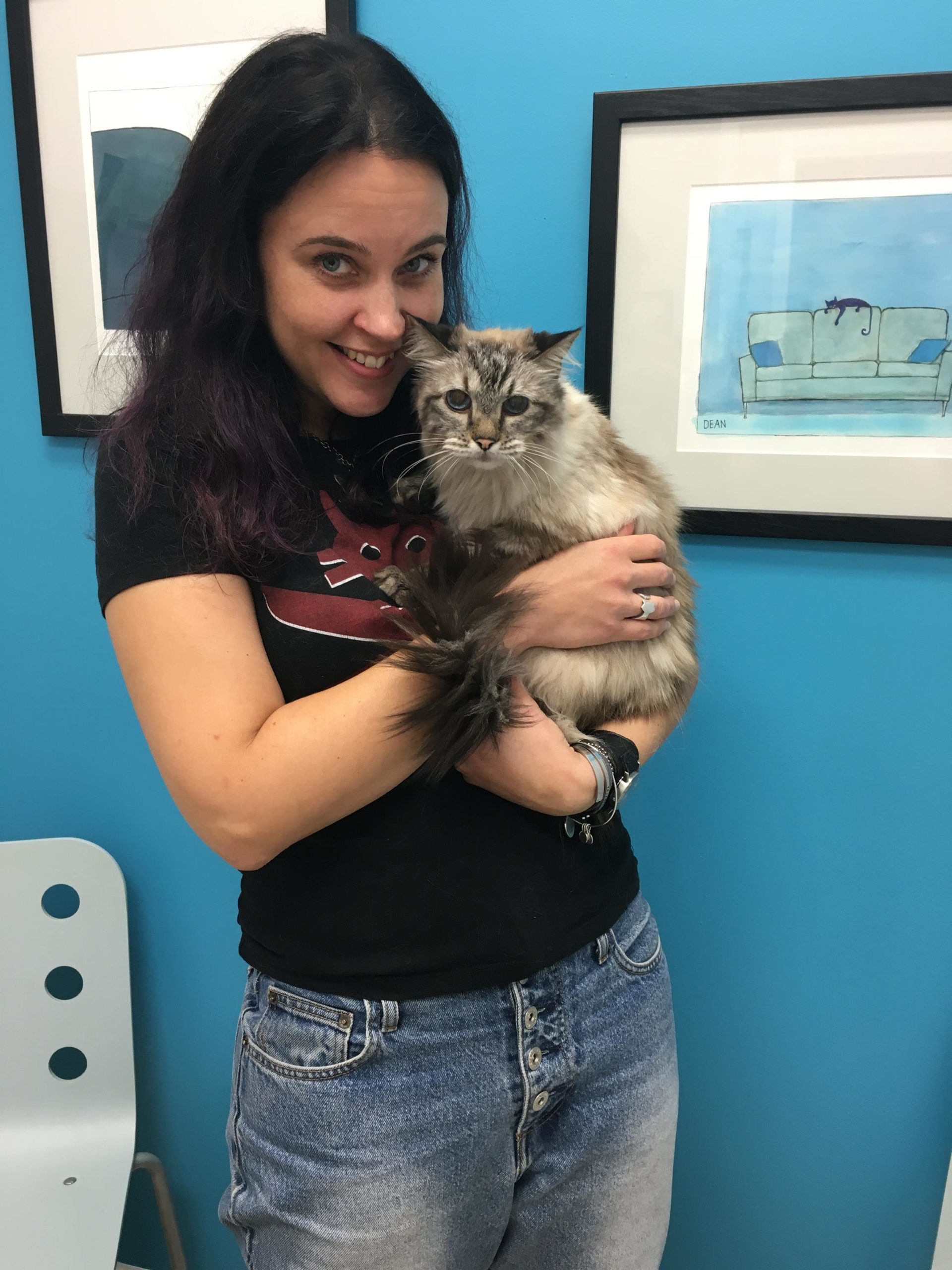 A "Mommy and Me" day at the office! 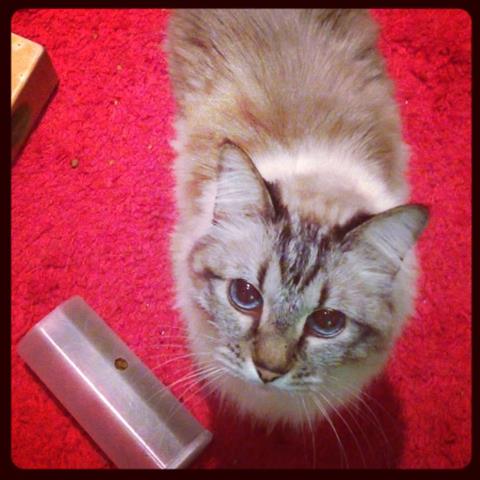 Still puzzlin'! Foraging right up until the end. 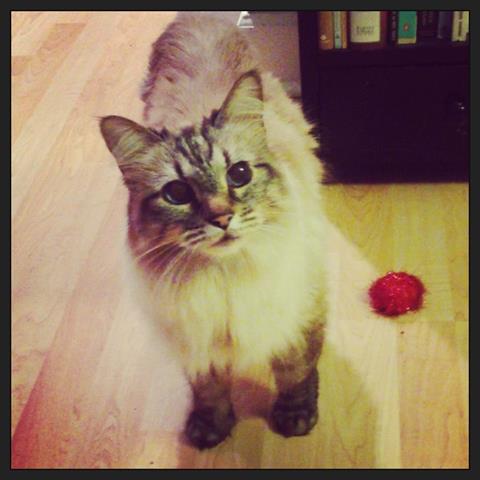 "Did someone say sparkly puff?"

This cat played with interactive wand toys and foraged for food up until a few weeks before she died. She was also a fierce hunter of sparkly puff balls and “called” while carrying through the house. This is a behavior that we sorely miss and loved the sound of her “calling” us to a meal with her prey. She also truly loved our dogs, groomed them, and even herded them! It was pretty hilarious to watch 20 year old, 7# Freyja, tell 100# Sebastian that he needs to move, “no, over here, never mind go over there!” And he would go! She had a lot of opinions! Her quality of life was outstanding. Even at 21 years of age, the top of a six-foot-tall cat condo (complete with heating pad) was where she lived. Needless to say, I start joint support very early in life, she started around age 12, and never showed a single symptom of arthritis or stiffness. 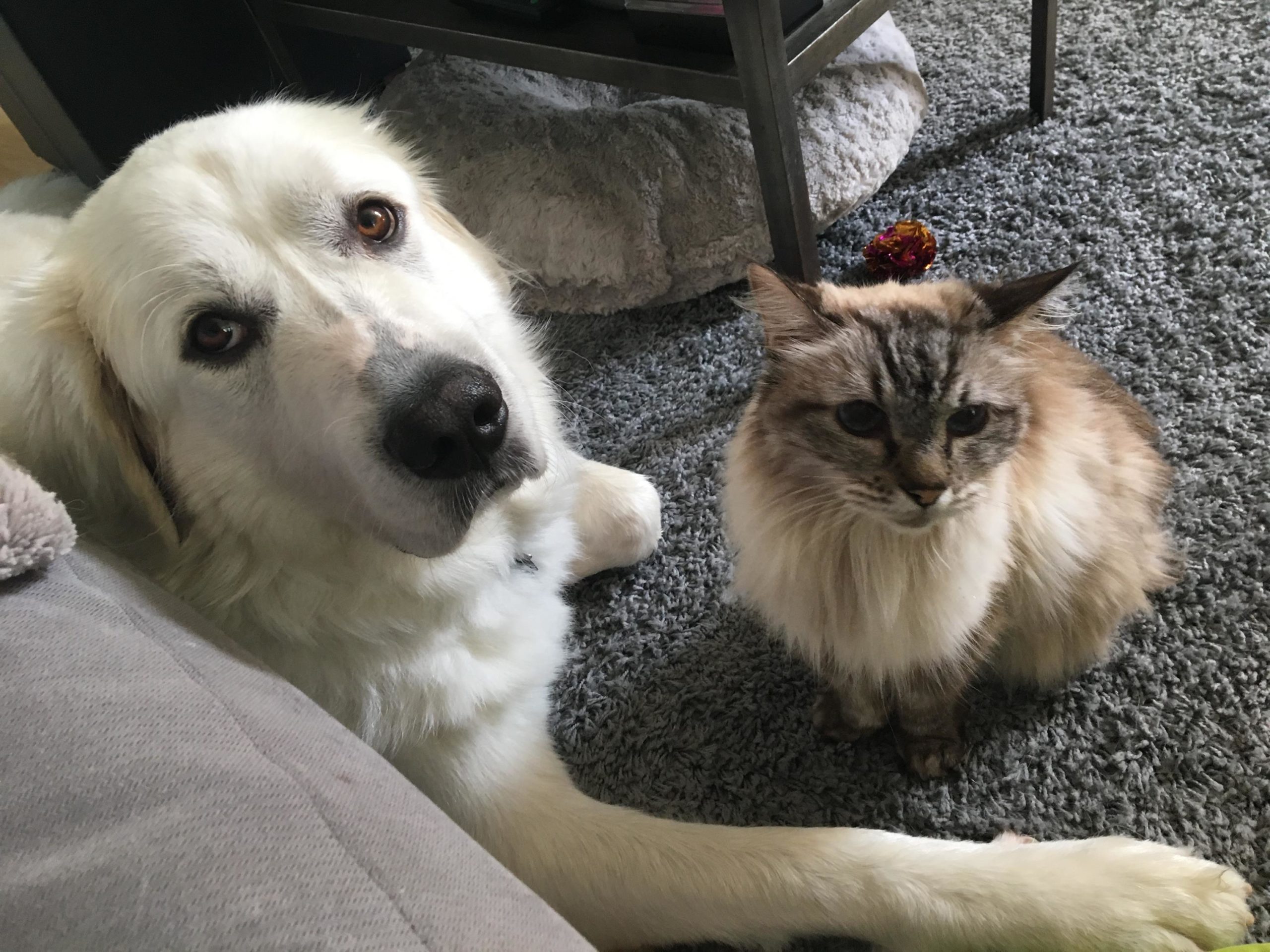 Freyja loved all of her doggies. She groomed them and taught them well! 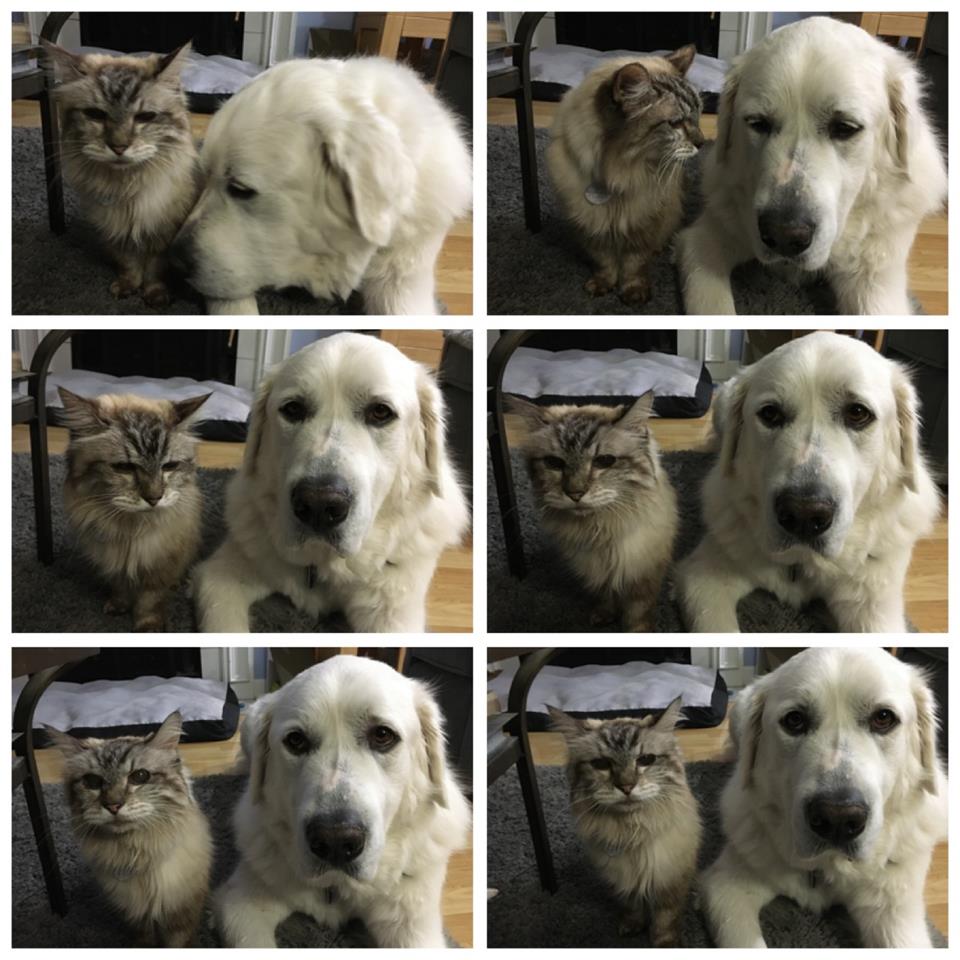 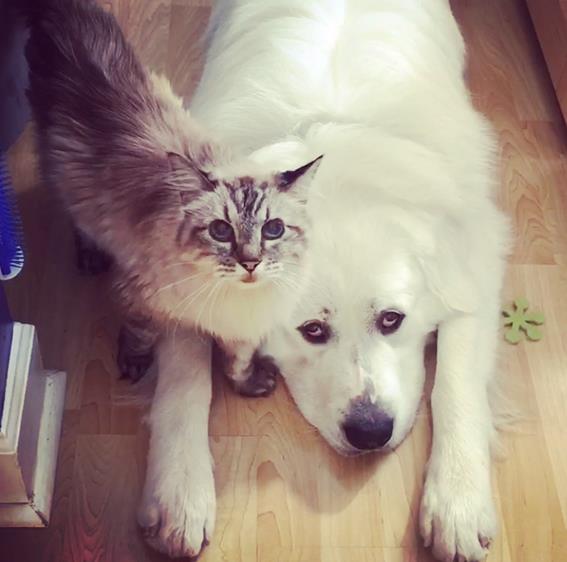 Freyja blooms knew every single animal that I have cared for in my adult life. She was strong, survived so much, including our housefire, and had great quality of life well into her geriatric years. She is dearly missed, but we hold no regrets with this one. Others have left us feeling robbed and heartbroken. Some we did so much for and still lost them so young. Twenty-one years, 5 months and 10 days is a pretty good run that we can accept. She will always be our beautiful  goddess. 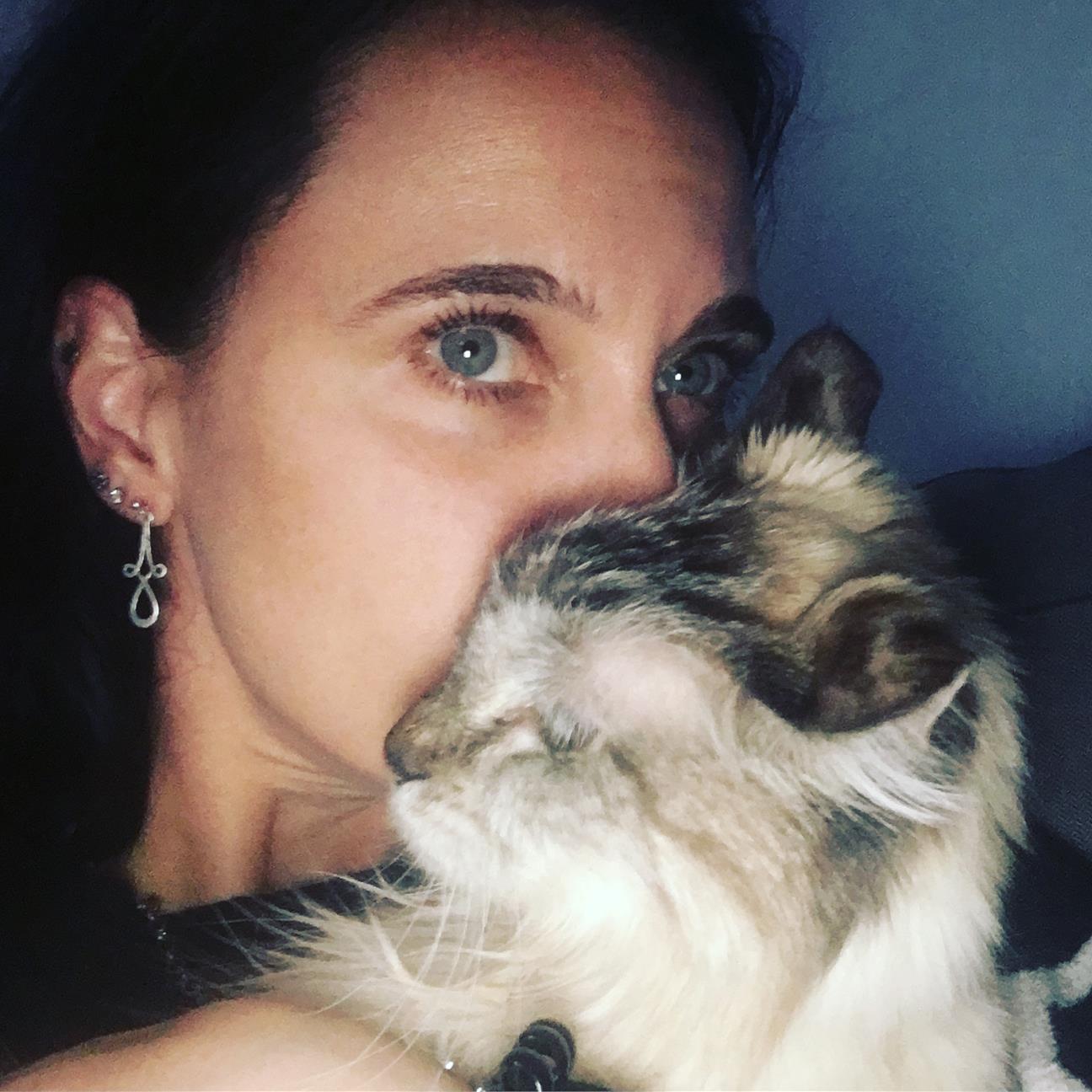 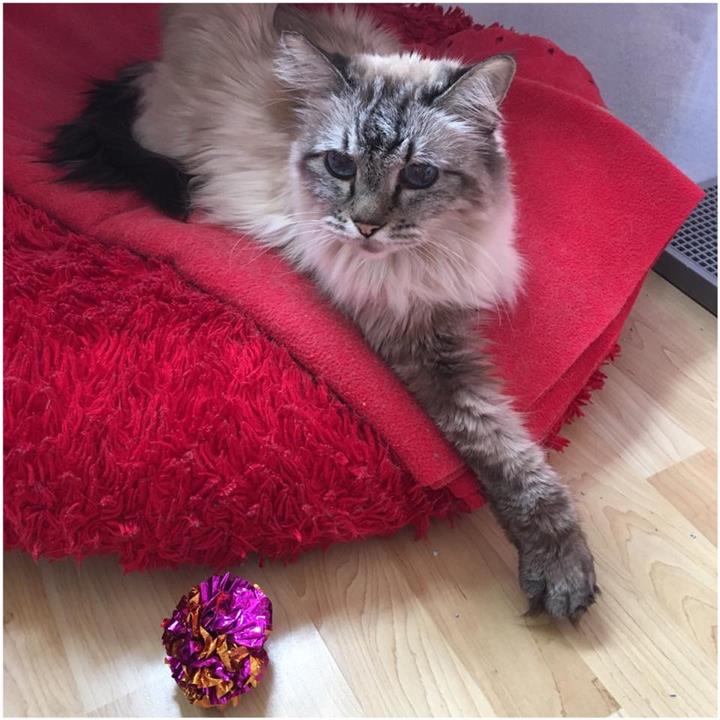 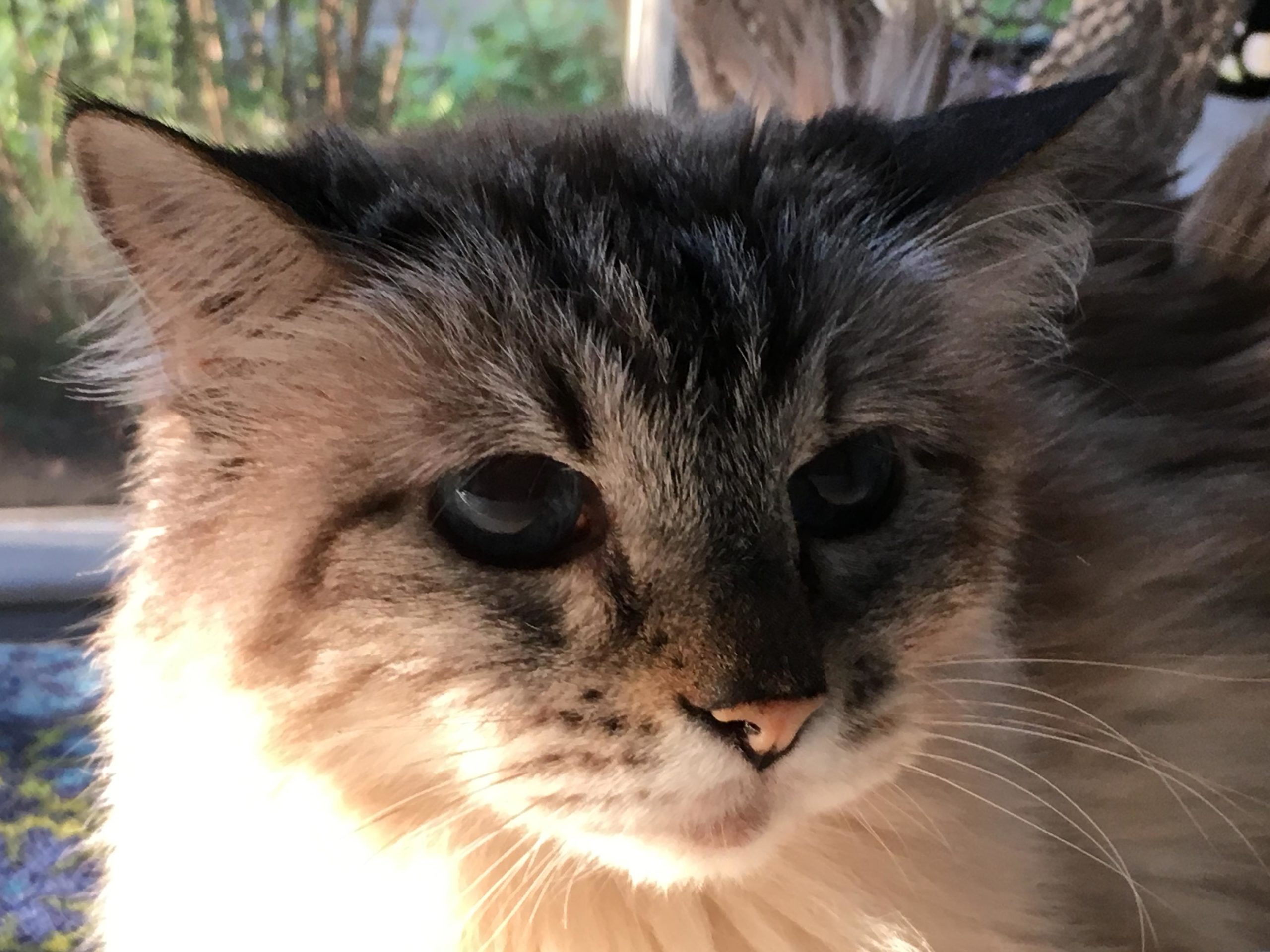 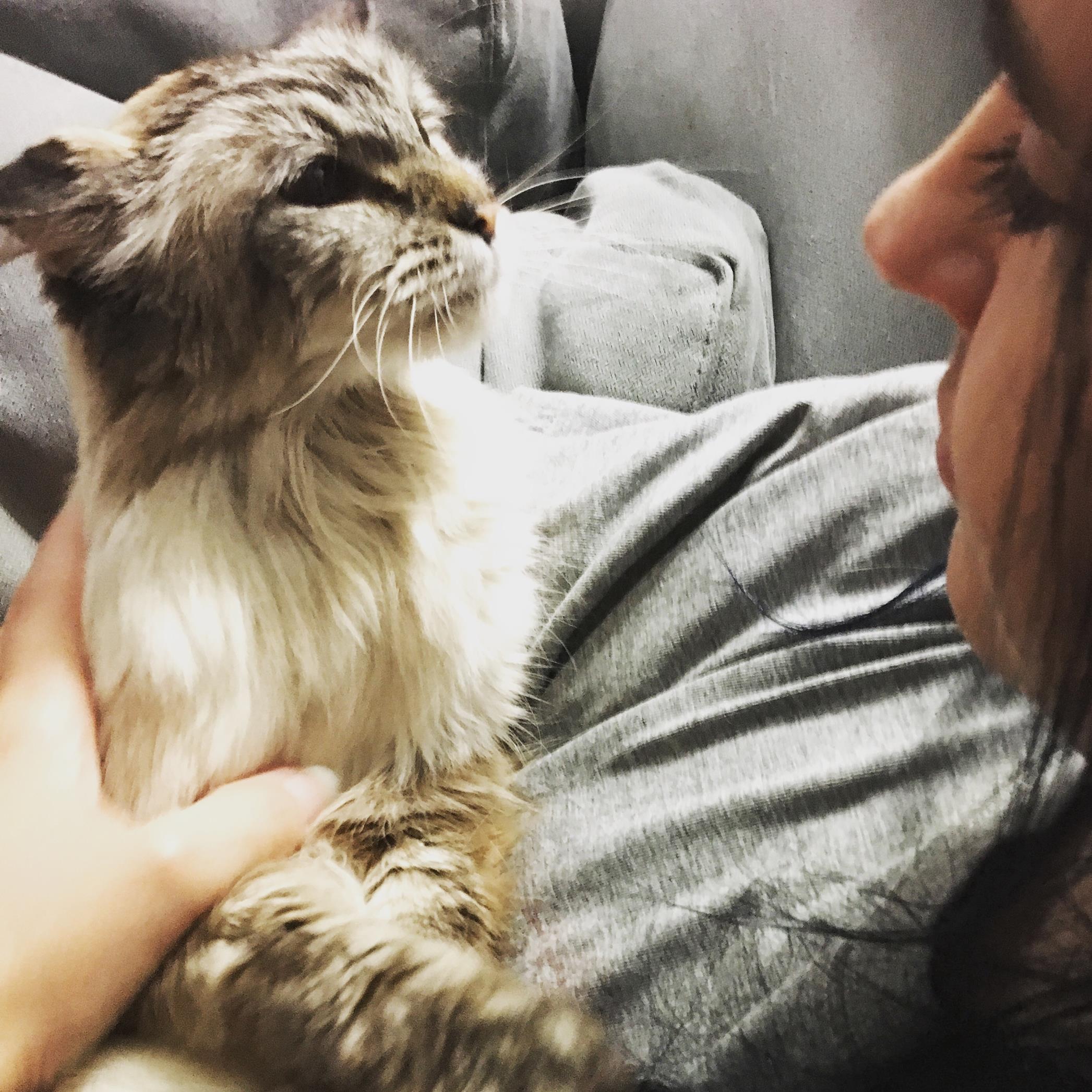 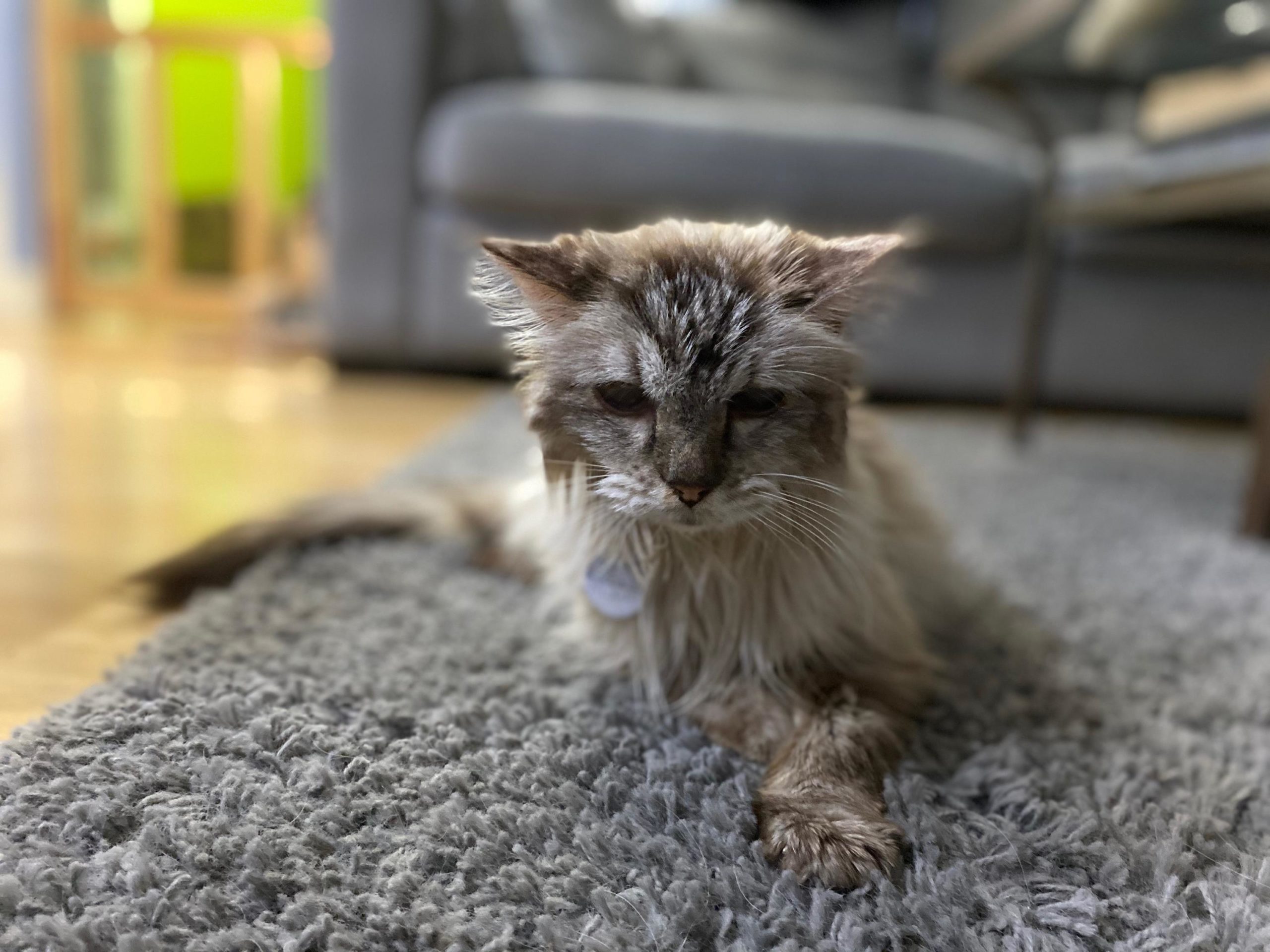 Her last day with us, since 4 weeks old. We had a good run. She was finally tired. 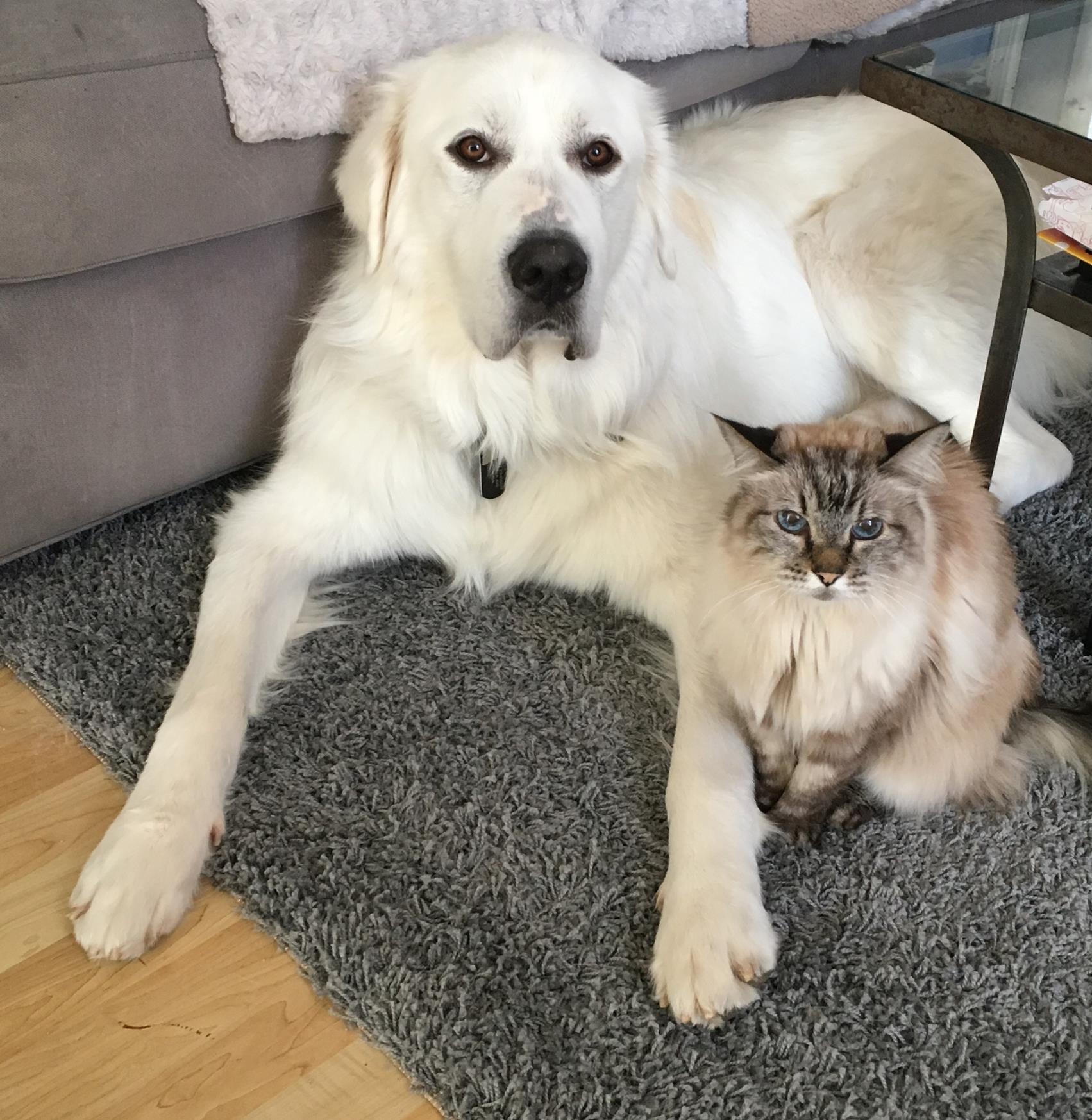 How lucky are we to have these amazing and gorgeous animals that someone else just threw away?
Previous Post: « Encouraging Your Cat To Use A Cat Wheel
Next Post: Kodiak Bears »