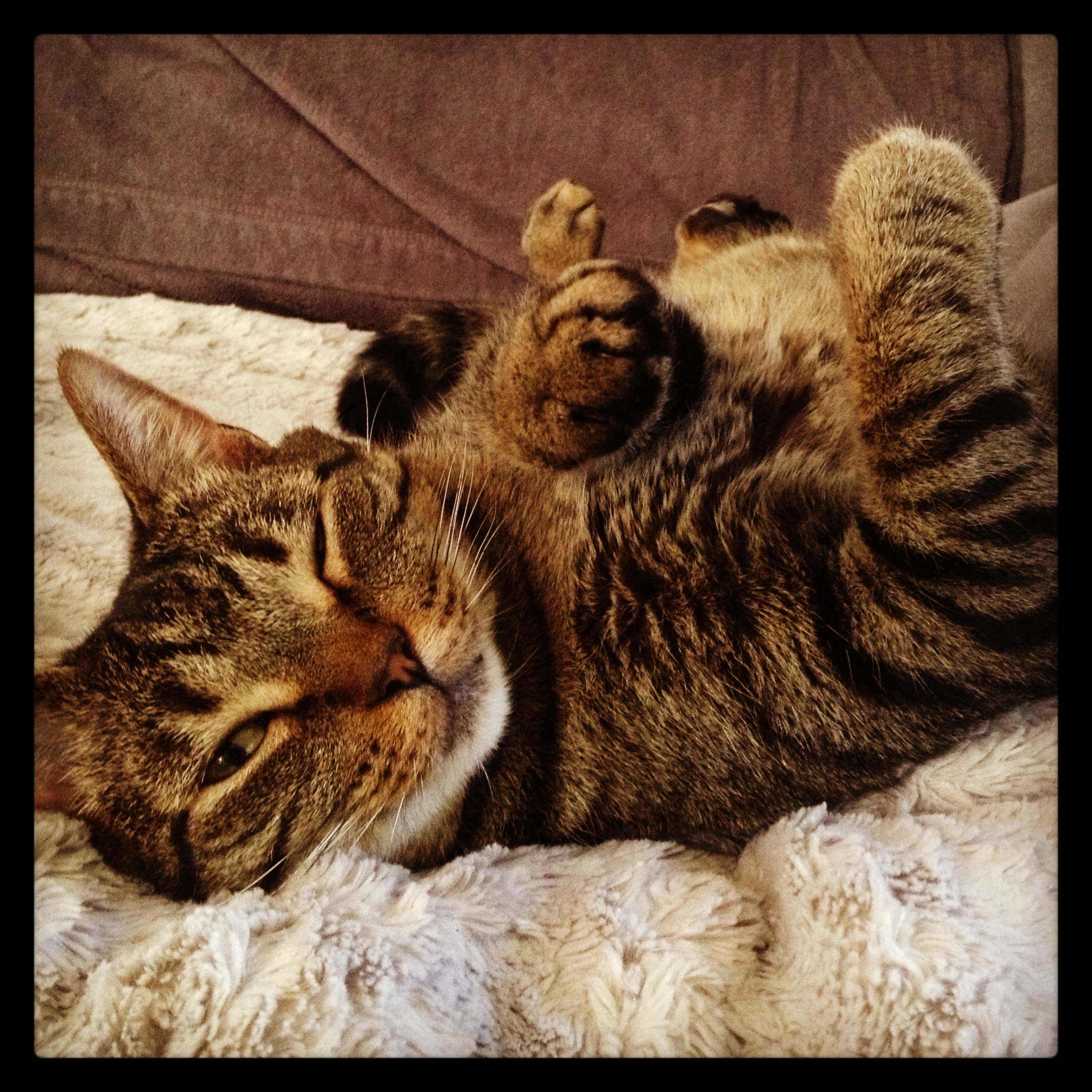 The domestication of the cat has increased its need for communication and signaling. The domestic cat is no longer an exclusively solitary species as it now lives close together with other animals and humans, benefits from cooperation, and needs to resolve conflict without physical confrontation. For the purpose of self-preservation cats perform a number of species-specific behaviors that can contribute to behavior challenges in the home environment. Their predatory behavior can present as play and aggression concerns, feline elimination preferences can present in litter box and marking challenges, and their superior senses can become overwhelmed in our human world presenting problems owners have a hard time grasping and relating to.

The seemingly secret world of feline communication involves olfactory (scent), auditory (hearing), visual (sight), and tactile (touch) communication. Scent signaling between cats is a vital means of communicating. For these well equipped carnivores scent signaling can help avoid what could become a dangerous encounter with a rival. Relying so heavily on scent communication, however, can also result in miscommunication and an inability to control the information conveyed. The following is a brief synopsis of some basic feline communication techniques and the correlating challenges they can pose in the home environment.

Scratching is a normal feline behavior that serves as a communication tool between cats. It is also a topic discussed with virtually every behavior consultation. Cats scratch to scent mark, visually mark, groom their nails and because it feels good. Cats tend to scratch in higher traffic areas rather than the perimeter of their home range and scratch the same chosen item over and over again. This acts as a clear visual marker which in turn draws attention to the scent deposited. This instinctual marking behavior factors into every behavioral discussion as it is commonly a behavior that owners want to appropriately direct or unrealistically cease. The latter is not possible. Even declawed cats perform the act of “scratching.” Helping clients understand why this behavior occurs and how to encourage the cat to use an appropriate scratching post is key. A cat’s natural desire to scratch in regularly used routes is precisely why scratching posts are often not used when they are placed in a corner of the basement where the cat never frequents.

Urine spraying is a complex and poorly understood feline marking behavior. Unfortunately it is also under researched, so exact interpretation of the messages left behind by urine spray is speculative. It can be exhibited by a cat of either sex regardless of neutering status, but is most common in unneutered males. It is suggested that cats can use urine as a passive aggressive behavior to avoid conflict with other rival cats. Urine marking is often done around the perimeters of a cats “home-range.” While the territorial function of urine marking is unclear, it is common when a new cat enters an existing cat’s space for the perimeters of that space to be urine marked. The marking could be done by the existing cat, the new cat, or both. It is also speculated that cats use urine marking to assist in the “time-sharing” of resources such as when hunting in a field. Prior to entering a field to engage in the hunt, a cat may spray to let another cat know that particular area is a currently occupied hunting ground.

Regardless of intent, urine marking is an all too common problem in many homes that house cats, particularly multiple cats. The interest in the deposited urine spray is intently investigated by all cats encountering it which suggests that the information left behind is of great importance. Traditional sniffing is typically followed by a Flehmen response. Flehmen is probably one of the most species specific behaviors that could be mentioned here, while it is not exclusive to cats, it is often discussed as if it were a feline exclusive behavior and seems to be most well known in the cat. Flehmen is usually performed in response to scents deposited by other cats, most commonly urine. During the Flehmen response the cat opens its mouth and moves its tongue back and forth across the roof of the mouth right behind the incisor teeth where the ducts to the vomeronasal organ are located. It is presumed that the vomeronasal organ gathers and possibly stores social information.

Helping families cope with urine marking and understanding the many reasons it may be occurring in their home with their particular cats is important in my role as a behavior consultant. While the precise messages left behind by sprayed urine are still yet to be translated (into human!), acquiring an understanding of this normal feline behavior is essential when experiencing an elimination problem.

The use of a loose substrate with which the cat can dig in, eliminate and then cover is another species specific preference in the cat. What many people do not realize is all of the particulars that can correlate with elimination preferences. For example, most cats prefer to urinate in one location and defecate in a completely different location. Sometimes even a different substrate is preferred for a bowel movement versus urination. This is certainly a topic of discussions with every behavior consult, but especially in homes with too few litter boxes or when the litter boxes provided are all in one room. An inappropriate elimination problem is often the result of too few places to eliminate so the cat will simply choose a place in the house that seems acceptable to them. Adding an additional box or two can quickly resolve such issues.

Because cats are a species that is both predator and prey and because the act of eliminating is one of their most vulnerable moments, litter boxes must allow the cat to feel safe while using them. This is precisely why hooded litter boxes, automatic litter boxes, and boxes placed in dark, dank, dead end areas are found to be unappealing and even frightening to a cat. Most cats prefer to eliminate in a location that allows them to visually see if a predator or even a rambunctious littermate is about to approach and attack. If given the choice a cat would rather eliminate in the middle of a vegetable garden and be able to see all around them versus using a cave-like environment. This usually helps provide a visual aid one can relate to. This is also why so many of the litter boxes on the market today do not appeal to cats. They are too small, often covered, or have some sort of gadget or contraption that makes noise, moves or does some other scary thing a cat would rather not experience while eliminating. Stressing the importance of these feline specific preferences is key to preventing a problem before it starts!

Previous Post: « Do You Have A Tubby Tabby?
Next Post: Species Specific Behaviors and How They Present as Behavior Challenges in the Home: Part Two »

“I was absolutely not eating err...I mean cleani

Does your cat hate their cat carrier?The key to

Let me caption this photo for you!! “Ugh, geez.

A little balancing this morning on daddy’s first

This is what meds time looks like when your cat lo

I’m sure many of you feel this way! Medicating y

It’s been a really stressful week, hell it’s a

Have you made a New Years resolution yet? How abou

Practicing what we preach here at our house! Make

It’s a beautiful day in the #atl to make #foodpu

Morning cuddles this #Caturday! Woke up to this be

The #guardianofthecats is assisting mommy with sis