Cats have a very short window in just the first few weeks of life where they learn the majority of their social behavior and the ability to interact with other cats. In other words, they learn to “speak cat”, by about 9-12 weeks of age. If they are not around other cats during these formative weeks they are typically defensively aggressive when confronted with their own species. This means they hiss, spit, swat and smack trying to get the other cat to back off. Alternatively, these cats are often extremely overzealous players to the point of being obnoxious. They do not learn how to interpret body language, how to physically play and when to stop the game of play (i.e. when enough is enough). There are exceptions to the rule of course, there always are, but for the most part, in my experience, I strongly suggest that kittens are adopted in pairs to avoid what I now call, “Tarzan Syndrome”. So many people have more than one cat these days, it is imperative that kittens are properly socialized. 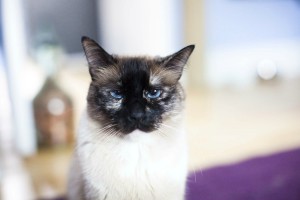 You see, even though we adopt a single dog that dog will typically get to go to the dog park, take walks and see other dogs, go to doggy day care, take car rides or go on trips to friends’ houses with other dogs, etc. When we adopt a single kitten and keep it responsibly as an indoor cat, it never gets to interact with its own species. That would make anyone a bit off wouldn’t it? Imagine you raised a human child in a room all alone it’s whole life and then decided to drop that child off at college, how great do you think that kid’s social skills are going to be? Well, that is what it is like for a kitten that spent its first year as an only kitten and then you decide you love cats and want another one and wonder why the introduction process is going so poorly!

The typical Tarzan Syndrome cat often starts out as a good will adoption. College student wants a pet that can deal with the crazy hours and lifestyle. They go out and adopt a 5-6 weeks old kitten and bring it home, love it, and play with it with their hands!! Then they wonder why it bites them all the time and attacks their feet! This kitten has now left the litter and doesn’t see another cat for a year or more. Then, in comes kitty #2. They’re cats they should like each other right? After all, they are almost exactly the same, they are cats! Wrong!

Again, there are exceptions to every rule. But if you adopt a pair of kittens they can learn from each other. They learn how to play, hunt and stalk each other. They learn when they bite too hard they get bitten back, or smacked and they learn boundaries this way. No dog, human or other animal can properly teach a kitten these behaviors-the power of their own strength. Nor should they be allowed to as a dog trying to teach a kitten that play was too rough could result in injury or worse. So what if you really can’t afford two kittens? Well, that is where Kitten Kindergarten comes into play! This is becoming much more common across the country, just as puppies have training classes, kittens need them too! Keep in mind that 2 kittens really aren’t much more trouble than one however, in fact, take it from me, it is easier. They entertain each other, sleep together, and hang out together when you are not home. I think they also stay out of trouble because they have each other resulting in less boredom and frustration type behaviors.

If you really only want one cat I encourage you to look for a cat that needs to live as an only child. These cats are extremely hard to place these days as so many families have more than one cat. These only cats are also miserable in a shelter environment and it is really such a good deed to adopt one if one is really what you want and know you can afford. I am simply encouraging that you do not create an only cat by going out and adopting one single kitten and creating “Tarzan”.

So what do you do if you find yourself with an “only cat” living in a multi-cat household? The absolute most important thing is to provide an environment of plenty. This means more than enough litter boxes in different areas of the home, and feeding stations, water bowls, scratching posts and vertical space should all be spread out. The cats should be able to get to everything they need without having to bump into one another. This is called successful avoidance. If one cat stalks and hunts the other that is a whole different problem. But if you introduced them slowly and positively and gave them a reason to like each other and they are still hissing and spitting at each other but not hunting each other than an environment of plenty is extremely helpful. Think about it from the human perspective, if you have a roommate you didn’t like would you want to share the same bed, toilet, and eat candlelit meals together? NO! So don’t make your cats eat together either! Cats are not family style eaters to begin with. That is a great way for one cat to not eat. Put one bowl upstairs and one bowl downstairs, litter on every floor and make sure those boxes are open and inviting so no one can stalk the other. Height is power and comfort so be sure each cat has high places they can perch.

If the problem is really severe you may need to enlist the help of a behavior consultant, your veterinarian, anxiety medications, etc. The best way to avoid this problem is to NOT create it. If you adopt an only cat that the adoption group says needs to live as an only cat, then don’t adopt another cat a year later! If you adopt kittens, adopt two! Better for the cats and double the fun for you! Two really are better than one! 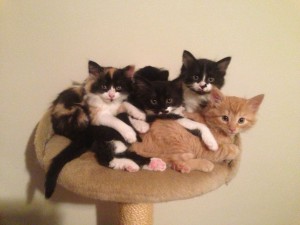 Previous Post: « Redirected Aggression in Cats: Recognition and Treatment Strategies
Next Post: Urination Outside the Litter Box: Why Medical Evaluations Are An Important Part to Solving the Problem! »